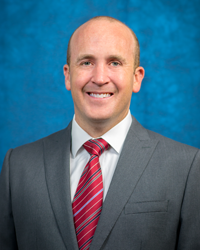 Allan Sandoval was named the department's Director of Business Technology Services in September of 2016. He has been with the North Carolina Department of Commerce since 2007, holding various technology-oriented positions during his tenure.

Allan has a degree in Geography/Geographic Information Systems (GIS) from Appalachian State University. He accepted a job with the North Carolina Department of Agriculture's Emergency Programs Division following his graduation in 2002.

Allan received his Certified Government Chief Information Officer certificate from the University of North Carolina School of Government in 2011.

Allan represents the department on the state's Information Coordinating Council and has served as the representative to the State Government User Committee's executive team. He has previously served as a member of Analyst Resource Center, a national workforce information committee tasked with developing standards for the Workforce Information Database, a requirement of the Department of Labor's Employment Training Administration's Workforce Information Grant.

A native North Carolinian, Allan is married and has a preschool-age daughter. He enjoys hiking, rock climbing and being outdoors with his family.