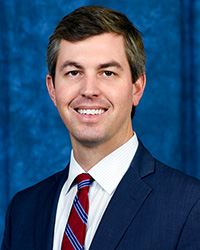 Prior to his current role, Jordan advised Governor Cooper and served as Director of Intergovernmental Affairs in the Governor’s Office for four years. In that role, Jordan led a team managing the Governor’s relationships with elected officials, local governments and stakeholders across the state as well as the federal government, including Congress, the White House, and executive branch agencies.

Prior to his state service, Jordan was a Health and Welfare Consultant with Hill, Chesson & Woody in Durham. Earlier in his career he served in the White House as Associate Director of Scheduling and Advance during the Obama Administration, and worked in various political settings, including on President Obama’s historic 2008 presidential campaign.

Jordan is a graduate of the University of North Carolina at Chapel Hill. A native of Greenville, North Carolina, Jordan lives in Raleigh with his wife and two young daughters.