Timing can make a difference for college graduates entering the labor force. Graduating into an economic downturn can hinder immediate employment and wage outcomes. However, do these initial adverse conditions lead to persistent losses through “recession scarring”? We analyze data in NC TOWER1 and Labor Supply and Demand Analyzer from 2003 to 2021. We find evidence of recession scarring for college graduates in the years immediately following graduation, but these wage losses dissipate over subsequent years.2 For the class of 2020, scarring effects are expected to be minimal due to tight labor market conditions throughout the pandemic and ensuing recovery.

Based on data from NC TOWER and the Labor Supply and Demand Analyzer, we find labor market conditions at the time of graduation impact early career wage outcomes for public university graduates in North Carolina.3 For example, the 2009 cohort entered the workforce at the height of the Great Recession when the statewide jobseekers to job openings ratio rose to 8.5. Consistent with these weak entry conditions, this cohort’s real average wage (adjusted for inflation) was $24,965 in the first year after graduation (see Figure 1).4

Before the COVID-19 pandemic, the 2019 cohort entered an expanding economy and tight labor market with 1.2 jobseekers for every job opening. Their real average first-year wage was the highest among all cohorts examined here, reaching $30,670 (see Figure 1). Just a year later, the 2020 cohort entered the workforce amid the COVID-19 recession. Despite the COVID-19 disruptions, the labor market remained relatively tight in 2020, leading to better wage outcomes than were seen during the Great Recession. Initial first-year wages for the 2020 cohort averaged around $29,400—only about 4% lower than the 2019 cohort. 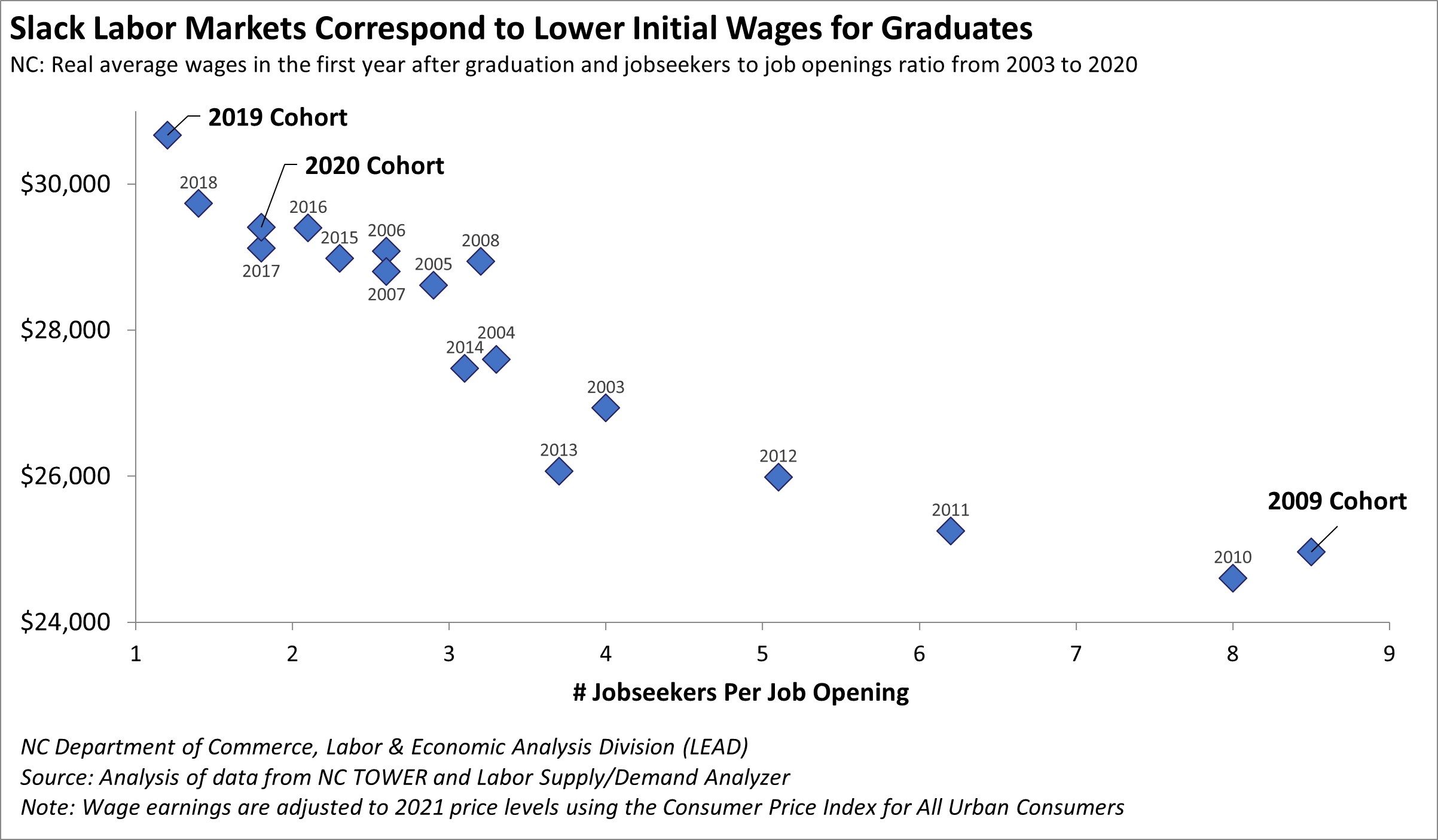 As expected, initial labor market conditions are strongly correlated with wage outcomes in the short term.5 However, the question remains whether there is a persistent negative impact of graduating into a recession (“recession scarring”) even after the economy recovers. Previous national-level studies have documented lasting wage losses ranging anywhere from seven to fifteen years.6

Here we graphically compare average annual wages over ten years for the 2003, 2006, and 2009 cohorts. Each graduating cohort entered the workforce at different points in the business cycle, when the number of jobseekers per job opening ranged from a low of 2.6 (in 2006) to a high of 8.5 (in 2009). If recession scarring were present, we would expect the 2009 cohort’s average wage to stay persistently below that of earlier cohorts at comparable stages in their career.

As Figure 2 shows, the real average annual wage for the 2009 cohort remained consistently below that of earlier cohorts during the first few years after graduation. After six-to-eight years, however, wages appeared to catch up and even began to exceed the average wages for the earlier 2003 and 2006 cohorts. After ten years, the 2009 cohort had the highest average wage of the three cohorts.

The visual exercise suggests some form of wage scarring may exist for students graduating into a recession, but these effects appear to fade out over time. Furthermore, graduates’ wages are contemporaneously related to the economic conditions in future years. For example, ten years from the 2003 cohort’s entry—around 2013—would have coincided with a sluggish Great Recession recovery. In contrast, ten years from the 2009 cohort’s entry would have been around 2019, during a strong economy. This may partly explain why the 2009 cohort’s average wage was higher in year ten than other cohorts. 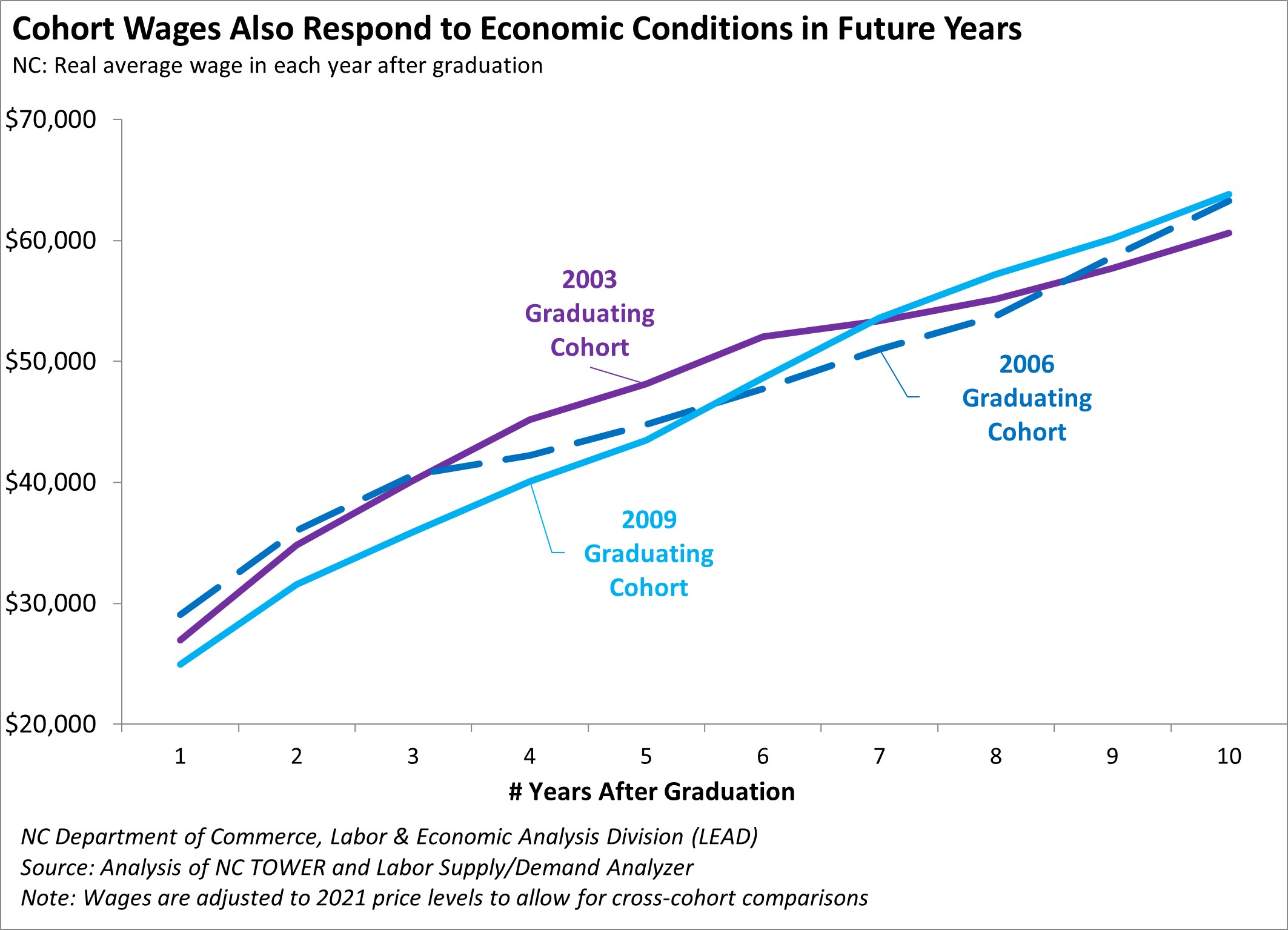 To test for recession scarring more formally, we estimate a regression model that controls for years of experience and any contemporaneous conditions affecting graduates’ wages in future years. We find that when the number of jobseekers per job opening increases by 1.0 (indicating more slack in the statewide labor market), a cohort’s real average annual wage decreases by 1.1%. For context, the jobseekers to job opening rose from 3.2 to 8.5 between the 2008 and 2009 cohorts, leading to an initial wage penalty of 6.1% for the 2009 cohort. There is evidence of recession scarring, but these negative effects dissipate with each additional year of experience and completely disappear after ten years.7

What do these findings suggest for the 2020 cohort going forward? Although these graduates entered the workforce during a period of widespread job losses, the labor market remained relatively tight once accounting for the fact most job losses were temporary layoffs and most people who were unemployed during the COVID-19 recession quickly returned to work. The number of jobseekers per job opening never exceeded 2.1 throughout 2020,8 making entry conditions for the class of 2020 better than it was for previous recession cohorts (e.g., 2009 cohort).

When comparing wage trajectories for the 2009 and 2020 cohorts, the predicted wage path for the 2020 cohort appears higher than the Great Recession cohort over ten years (see Figure 3).9 Predictions based on our regression model suggest scarring effects appear less severe for the class of 2020 due to the tight labor market conditions at entry and the relatively short-lived pandemic recession. 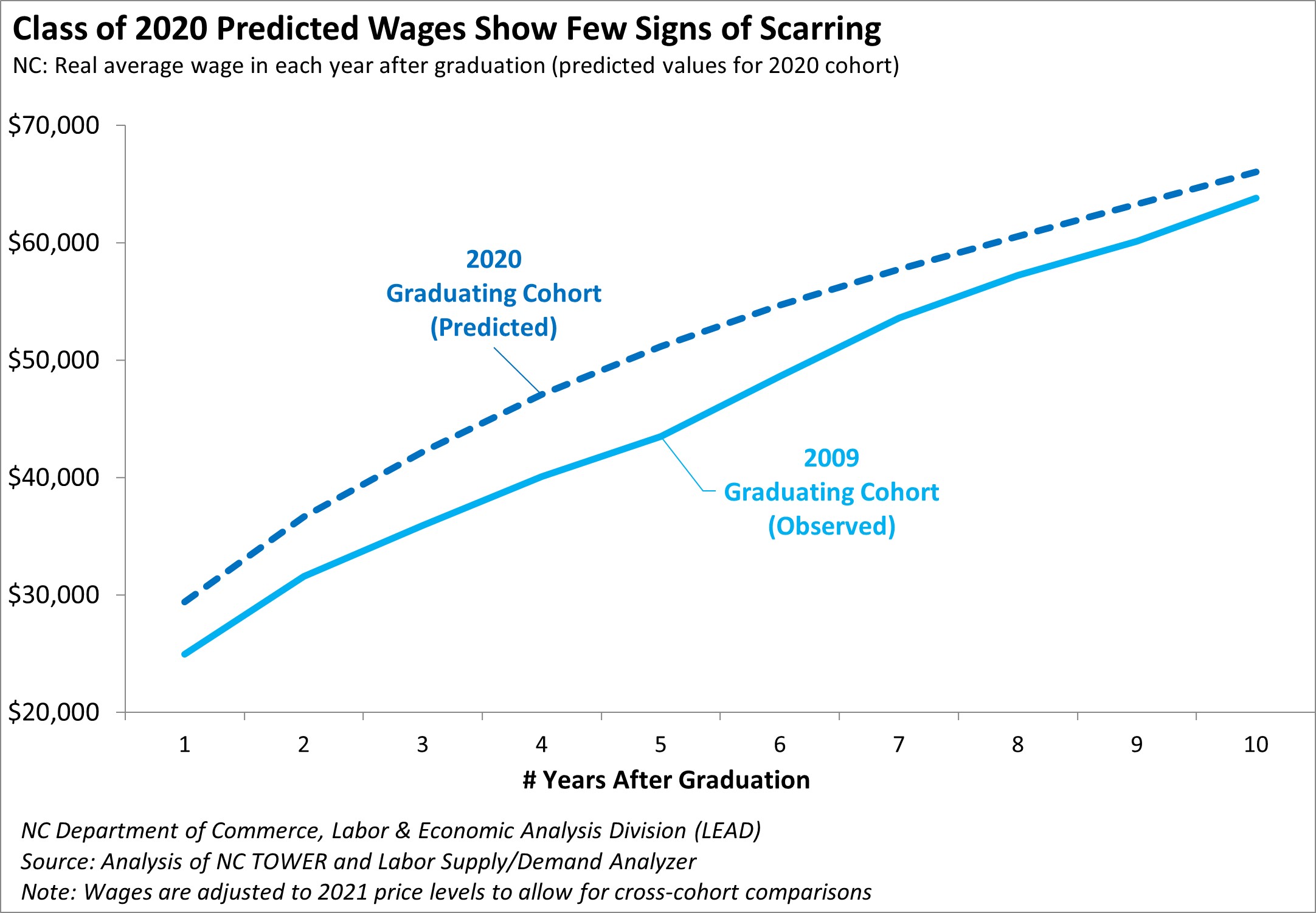 There is a distinct disadvantage of graduating into a contracting economy when job opportunities are sparse. Exposure to initial adverse conditions can have a downstream effect on earnings that gradually diminish over time—a prevalent feature for Great Recession-era college cohorts. Our findings suggest recession scarring effects are persistent but not permanent, completely dissipating after ten years. For the class of 2020, recession scarring is expected to be minimal due to a rather tight labor market throughout the COVID-19 recession and ensuing economic recovery. Nonetheless, long-term consequences could persist in other areas beyond just employment and wage outcomes.

The exact causal mechanism explaining why recession scarring may exist and eventually fade away remains inconclusive. Job mobility may play a role in the catch-up process for cohorts who graduate during a recession, but the existing research into this phenomenon has relied on pre-Great Recession data. Furthermore, scarring effects appear to differ between college majors. It is also unclear what differences, if any, exist between community college and university graduates after recessions.

The COVID-19 recession stands out among previous recessions, characterized by a record surge in temporary layoffs, relatively tight labor market conditions, and a short duration. However, future recessions may more closely resemble past downturns, such as the Great Recession, with protracted economic declines. Thus, for future cohorts, entering a recession may not look like the 2020 cohort experience and may be fraught with more risks. The uncertainty underscores the importance of not downplaying recession scarring risks and continually evaluating graduate outcomes over time.

We estimate an augmented Mincer-style equation using a least squares method, controlling for a quartic polynomial in the number of years after graduation (“AfterYear”) and a vector of calendar year indicators (ϒ) corresponding to the year a cohort’s average wage is observed. Our primary variable of interest—the Jobseekers per Job Opening Ratio at base year, or the “supply-demand” ratio (S/DBaseYear)—shows the effect of entry labor market conditions on a cohort’s average wage over time. We interact this ratio with AfterYear to investigate whether the effect of entry labor market conditions is persistent.

2For this article, we only consider wage earnings as our primary outcome of interest. Previous studies on recession scarring have also considered employment rates, hours worked, and health outcomes. We also only consider public university graduates in North Carolina.

3Our sample consists of nearly six hundred thousand Bachelor’s degree graduates from all programs across all UNC System campuses between 2003 and 2020.

4All wage figures presented in this article are adjusted to 2021 price levels using the Consumer Price Index to allow for cross-cohort comparisons.

6Unlike previous studies that focus on unemployment rates to assess recession scarring, our analysis considers the jobseekers-per-job opening ratio as a preferred measure of labor supply and demand dynamics. Unemployment rates include workers on temporary layoff, who are not necessarily seeking jobs. Our jobseekers-per-job opening ratio only includes a percentage of those on temporary layoff who are seeking work. Our measure also factors in employed workers and those not in the labor force, each weighted by their relative likelihood of seeking work.

7Our regression estimates suggest each successive year of experience reduces the initial negative effect of weak labor market conditions (as measured by slack). Between years 10 and 11, the effect converges to zero.

8According to the LEAD Labor Supply and Demand Analyzer, the statewide jobseekers per job opening ratio reached 2.1 in April 2020 but receded to 1.5 by the end of the year.

9Expected average annual cohort wages for the 2020 cohort come from the previous regression equation. The predictions assume future years have similar conditions to 2021—the most recent year in the sample.