We’re living through the hottest job market in decades. But while many workers are getting a raise, the top 20% of earners continue to receive most of the wages paid in North Carolina. This article uses data from North Carolina’s Common Follow-up System (CFS) to show that a tight labor market has helped lift the fortunes of many workers but has done little to resolve longstanding economic disparities in our state.

The amount of wages earned by a typical employee in North Carolina has risen notably in recent years as a growing economy and a tightening labor market has bolstered workers’ job-finding prospects and improved their negotiating position. Real median annual earnings (adjusted for inflation) started to rise in 2015 after a decade of stagnation and continued its upward march during the COVID-19 pandemic, increasing to a record high of $32,000 in 2021 [Figure 1].1 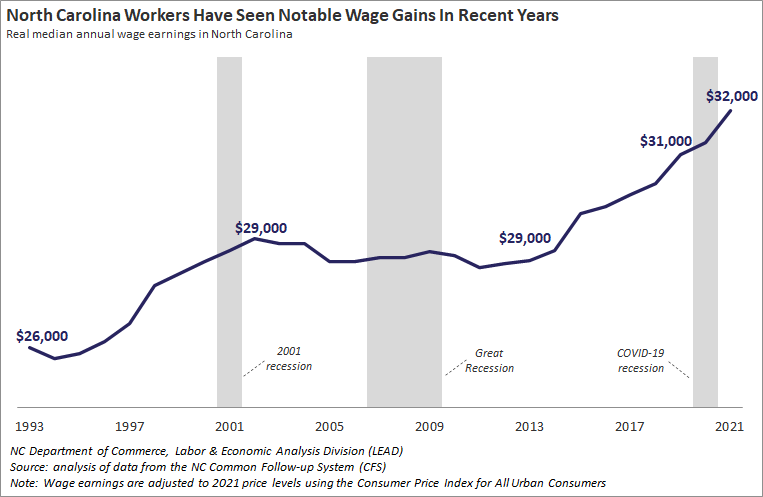 Wage gains occurred across the entire earnings distribution, from the lowest-paid (10th percentile) to the highest-paid (90th percentile) workers in North Carolina. Wages grew at least 12% across-the-board between 2014 and 2021 and increased at least 3% at every earnings level between 2019 and 2021 [Figure 2]. 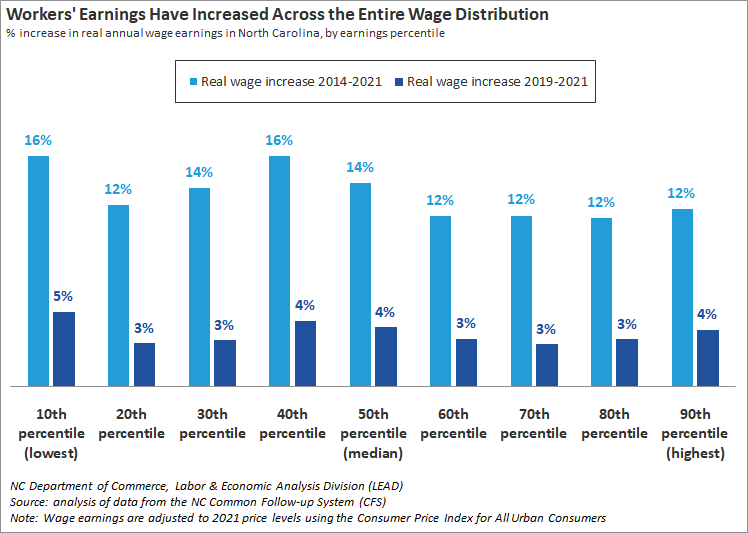 However, although low-wage workers have seen improved earnings in recent years, the gap between low- and high-earners has proven to be remarkably persistent. The 80th percentile earned $68,000 in 2021, more than twice as much as the median worker in North Carolina. The top 20% of workers—those earning more than $68,000 per year—collected most of the wages paid in our state, while workers making less than the median wage accounted for only 14% of all wage earnings in 2021 [Figure 3]. 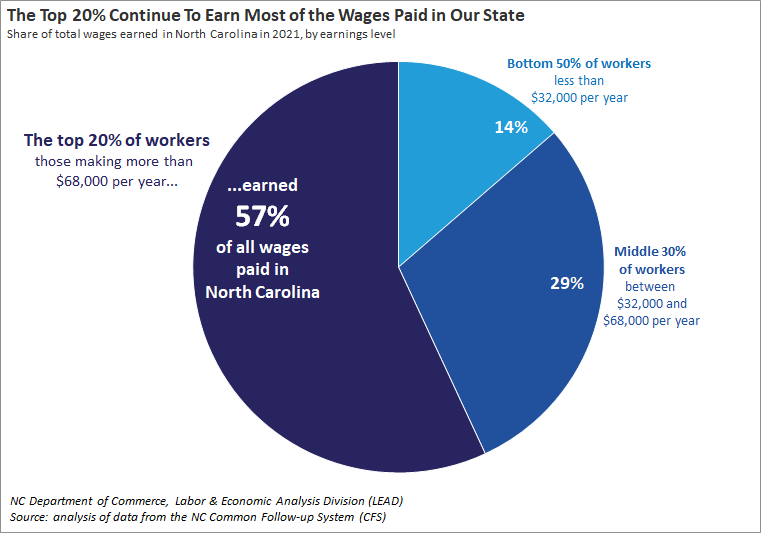 Wage inequality in North Carolina intensified during the 1990s and early 2000s, with the share of wages paid to top-earners increasing from 52% in 1993 to 57% in 2006. Although the inequality trend leveled off following the Great Recession, disparities in wage-earning improved little in subsequent years and, by some measures, worsened slightly during the COVID-19 recession [Figure 4]. 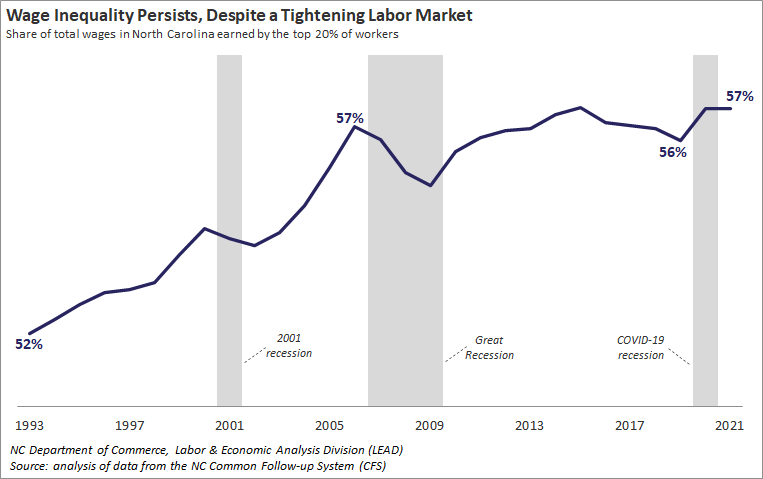 These data demonstrate that tight labor markets can help improve the circumstances of workers but have limited impact on economic inequality. A declining number of jobseekers and an ever-higher number of job openings have made workers a hot commodity, leading to wage gains in all sectors of our economy and all regions of our state, but the structure of our economy continues to be tilted in favor of the highest earners, with the top 20% receiving most of the wages paid in our state. The economic pie has gotten larger, but the top-earners are still taking the largest slice of the pie.

These economic disparities are driven in part by a labor market that is highly polarized by educational attainment. Most of our highest-paid occupations (those paying at least $68,000 per year) require at least a bachelor’s degree for entry, but fewer than one-third of adults in North Carolina have completed a four-year college education. A growing economy and a tightening labor market can help boost wages for all workers, and at the individual level, some workers might be able to move up the career ladder by completing post-secondary education. But economic growth and individual skill attainment are unlikely to meaningfully address wage inequality in North Carolina without a shift in the structure of our economy toward a more equitable distribution of earnings for all workers.

1The CFS includes only wage earnings that are covered by North Carolina’s state unemployment insurance program and thus may omit earnings from informal employment, self-employment, federal government employment, out-of-state employment, and other non-covered work, as well as income from non-labor sources (such as capital gains). Throughout this article, wage earnings are adjusted to 2021 price levels using the Consumer Price Index for All Urban Consumers, reported before-tax (gross), and rounded to the nearest thousand.