Many economists, commentators, and advocates have referred to the aftermath of the COVID-19 recession as a “K-shaped recovery”, with high-wage employment growing rapidly and low-wage employment lagging behind. However, in North Carolina, low-wage workers have actually fared better than they did during previous recessions. This article uses data from North Carolina’s Common Follow-up System and Labor Supply and Demand Dashboard to show that the impact of the COVID-19 recession on our state’s low-wage labor market has been more complicated than the conventional wisdom suggests. 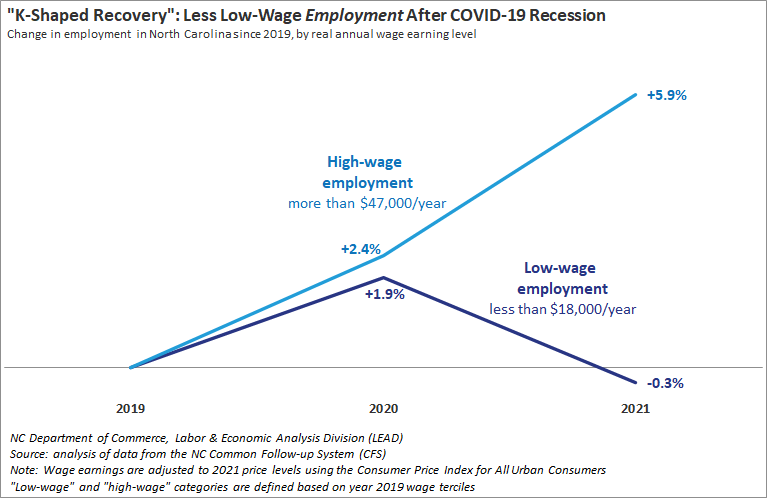 Although our state has shifted away from low-wage employment, we have not seen any deterioration in the employment outcomes of low-wage workers. In fact, low-wage workers are having better luck in the labor market than they were at this point following previous recessions.

Here we track the outcomes of workers who earned relatively low wages in the year prior to each of the last three recessions.3 Low-wage workers were more likely to be employed in 2021, the year following the start of the COVID-19 recession, than they were during the second year of the 2001 recession or the Great Recession of 2007-2009 [Figure 2]. Of those who remained employed, low-wage workers were also slightly more likely to move up the ladder to middle- or high-paying employment in 2021 than they were during previous recessions. 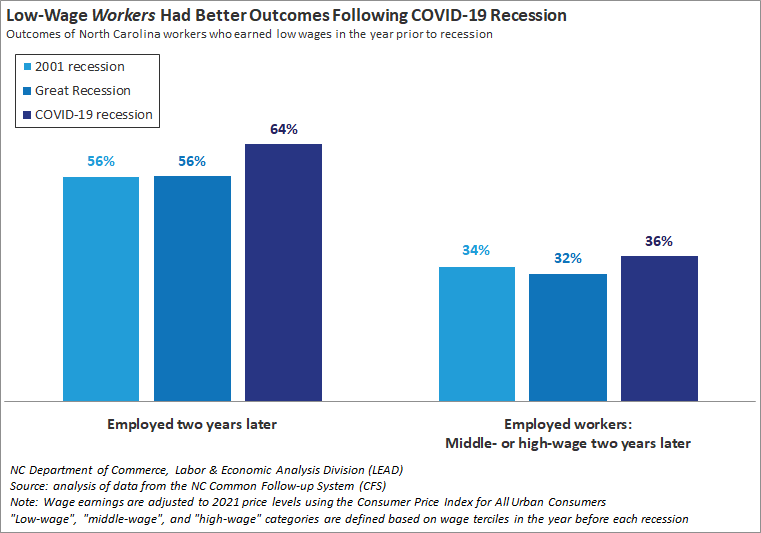 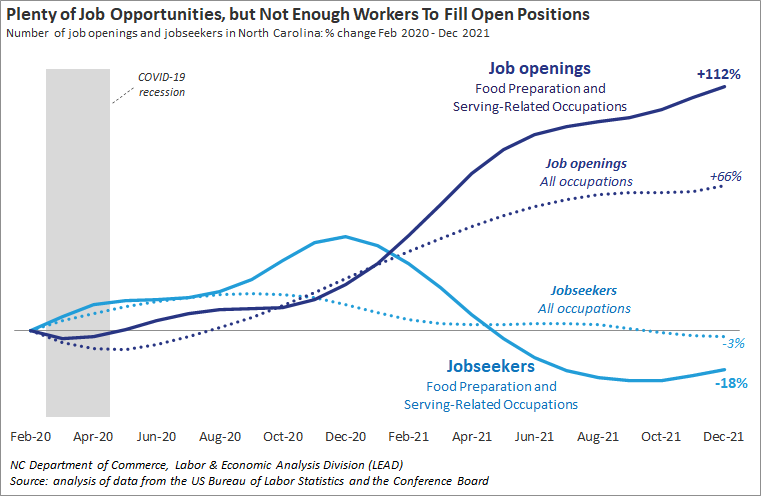 What did the conventional wisdom about the “K-shaped recovery” get wrong? In part, it could be that low-wage workers experienced better outcomes in North Carolina than in other states. But primarily, the misleading narrative about the K-shaped recovery reflects confusion about how cross-sectional data—which offer point-in-time snapshots of the economy—differ from longitudinal data, which follow the outcomes of individuals over time.

Despite more than two years of uncertainty and disruption, we shouldn’t lose sight of the bright spots in the COVID-19 economy. The labor market in North Carolina has seen an expansion of employment opportunity during the past two years, leading to improved employment outcomes and higher earnings for low-wage workers. While economic inequality is a problem that predated the COVID-19 pandemic and continues to plague our state, the evidence presented in this article shows the employment situation of low-wage workers in North Carolina has in fact improved in recent years.

1Throughout this article, wage earnings are adjusted to 2021 price levels using the Consumer Price Index for All Urban Consumers and are reported rounded to the nearest thousand. “Low-wage” and “high-wage” categories are defined here based on year 2019 wage terciles. In 2019, the lowest-paid group of workers in North Carolina earned less than $17,532, while the highest-paid group earned more than $46,678.