North Carolina saw a record-high number of layoffs during the COVID-19 recession. However, the vast majority of workers who lost their job were quickly re-employed, with most of them returning to their pre-layoff industry sector and their pre-layoff employer. This article uses data from the North Carolina Common Follow-up System to show that the COVID-19 recession had a much smaller impact on displaced workers than previous recessions.

This article examines a cohort of North Carolina residents who filed initial claims for unemployment insurance—a common proxy for job displacement—during the COVID-19 recession.1 We compare their outcomes to workers who were laid off during the Great Recession of 2007-2009 and those who lost their job during the 2001 recession to assess whether the COVID-19 recession had a larger impact on displaced workers than previous recessions.2

We find that nearly 80% of workers laid off during the COVID-19 recession were re-employed in North Carolina within one quarter (three months) after their layoff date, while only around half those who lost their job during previous recessions were able to return to work the following quarter [Figure 1]. This outcome disparity lasted for at least six quarters (a year and a half) following layoff; nearly 78% of workers were employed six quarters after losing their job during the COVID-19 recession, compared to only 63% during the Great Recession and 51% during the 2001 recession. 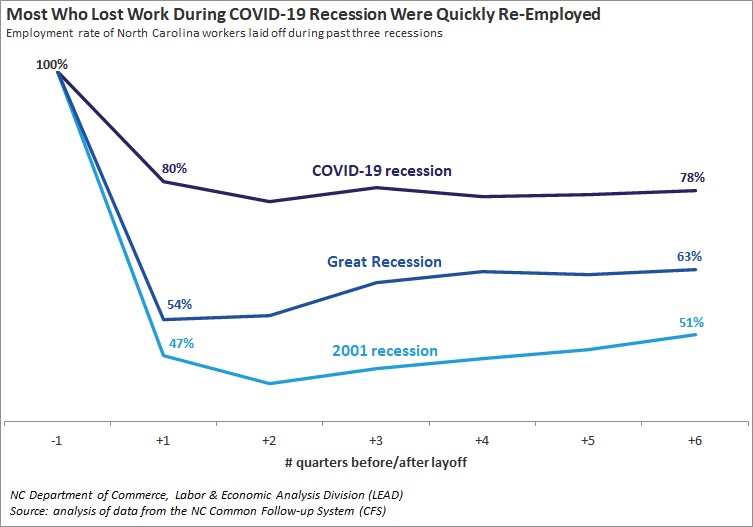 Most of those re-employed after the COVID-19 recession returned to the same industry sector where they worked in the quarter prior to their initial layoff [Figure 2].3 This is a very different outcome from what we saw during the Great Recession and the 2001 recession, when more re-employed workers switched to a different industry sector. 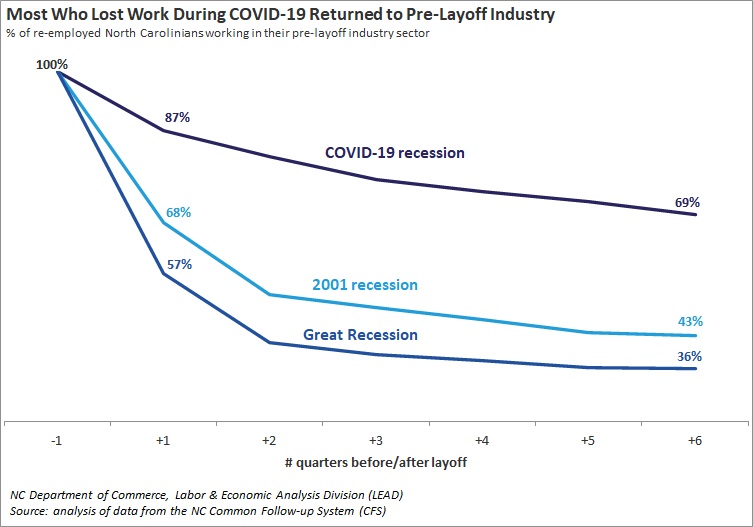 Likewise, we find most of those re-employed after the COVID-19 recession returned to the same employer they worked for prior to their initial layoff, while those who lost work during the Great Recession and the 2001 recession were unlikely to return to their pre-layoff employer [Figure 3].4 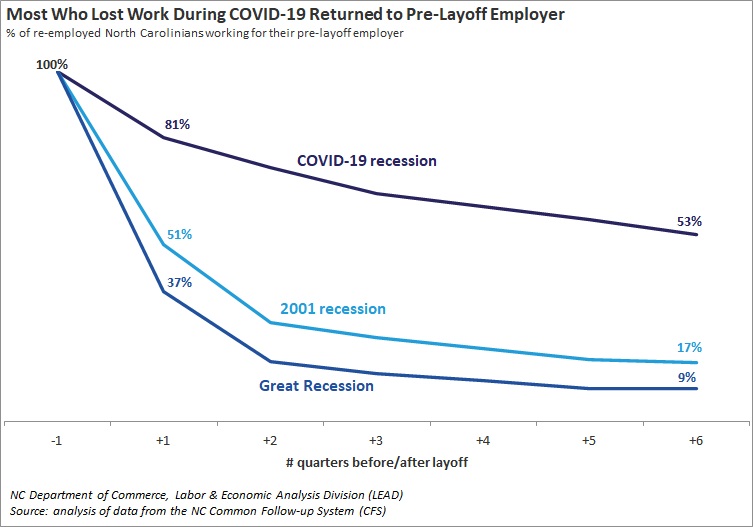 1To enable comparability over time, we limit our analysis to claimants who were approved for regular state UI benefits. Pandemic UI benefit recipients are not included in our sample.

3We identify the sector where each individual earned the most wages in a given quarter as their primary industry sector of employment. Industry sectors are categorized at the 2-digit North American Industry Classification System (NAICS) level.

4We use employers’ UI account number as a unique identifier for firms. We identify the firm where each individual earned the most wages in a given quarter as their primary employer.