As North Carolina’s economy continues to recover from the recession caused by the COVID pandemic, we have reviewed the data from the U.S. Census Bureau QWI Explorer to investigate how Black / African American employment and earnings have been affected between Q1 2019 and Q1 2021.

Data from this period reveals that that total employment in North Carolina decreased by 1.1%.  Among the reported races in QWI, Black /African American employment was impacted the most with a decrease of 2.8% (about 29,480 jobs). 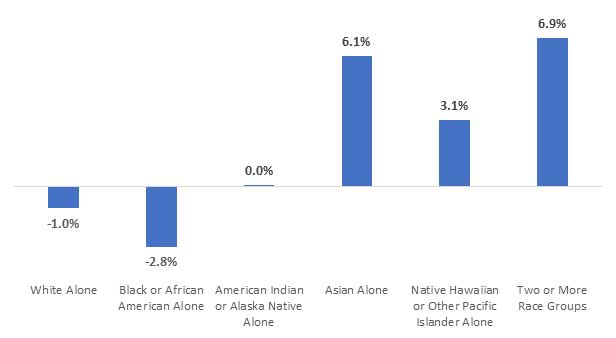 Black / African American workers did not necessarily experience wage gains in the five industries with employment growth. Only two saw wage increases after adjusting for inflation: Professional, Scientific, and Technical Services (2.9%) and Finance and Insurance (0.6%). Transportation and Warehousing, the industry with the largest employment increase by Black / African American workers, received the most wage decline (-10.4%).

Note that at the time of publication of this article, QWI has released Q2 2021 data for employment but not for earnings.