The COVID-19 pandemic has led to record-high job losses. The task of identifying programs and services that advance the career prospects of laid-off workers is more important than ever. In a recent study, we use data from the North Carolina Common Follow-up System to evaluate the impact of registered apprenticeship on individuals who lost their job during the Great Recession, finding that apprenticeship can be an effective strategy for improving the long-term outcomes of workers displaced during an economic downturn.

North Carolina’s Common Follow-up System (CFS) has long been used to report the employment outcomes of individuals who receive publicly funded job training, re-employment assistance, and other workforce services. However, these outcome data can be difficult to interpret without context. Some workforce programs enroll participants that are easier (or harder) to serve than others. These individuals may have experienced positive (or negative) employment outcomes regardless of whether they received help from the government. The question for policymakers is: what services make workers better off than they would have been otherwise? In other words: what services have a causal impact on workers?

Our study uses CFS data and scientific research methods to demonstrate that registered apprenticeship has a causal impact on laid-off workers, resulting in higher rates of employment and higher wage earnings that last at least nine years following job loss.

We also test our findings using several other methodologies, all of which confirm the effectiveness of North Carolina’s registered apprenticeship programs. Our full report, including technical details, can be found here. 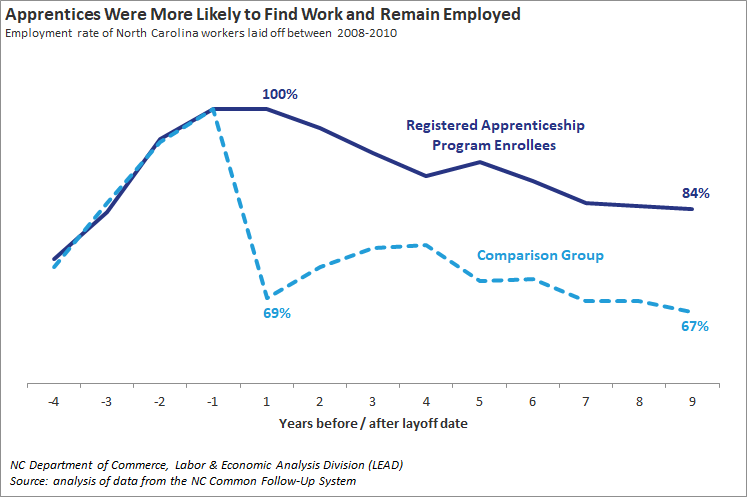 Apprenticeship did not only increase the likelihood of finding work and remaining employed; it also led to finding and maintaining higher-paying employment. Individuals who enrolled in an apprenticeship program earned higher wages at their jobs than non-enrollees in subsequent years, earning $7,201 more on average (in 2019 dollars) nine years after their initial layoff date. 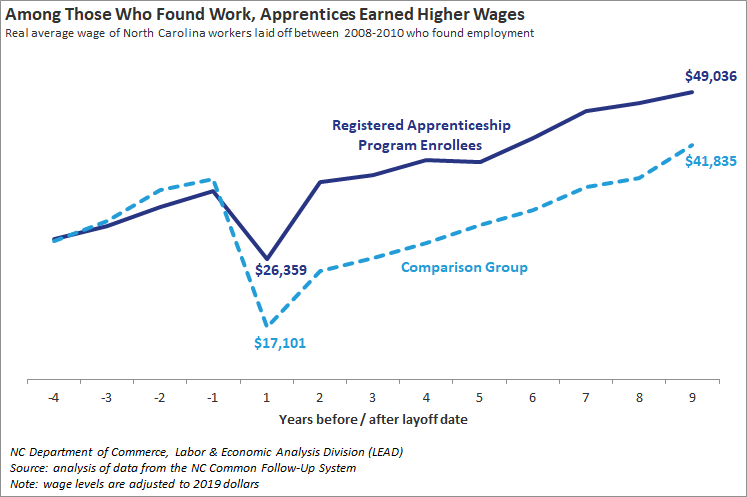 Because program enrollees were more likely to find and maintain higher-paying employment, they earned more than non-enrollees overall. When comparing apprentices to all individuals in the comparison group, regardless of their employment status, we find that program enrollees earned $9,691 more in the ninth year following their initial layoff date than those who did not enroll in the program. 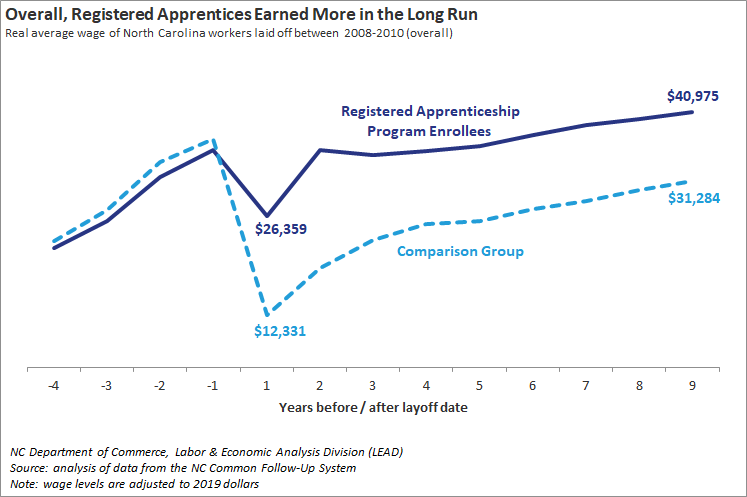 There are numerous reasons why registered apprenticeship might be expected to improve the long-term outcomes of laid-off workers. Individuals are required to apply for and obtain paid employment at a sponsoring employer before they can be enrolled in an apprenticeship program, thus reducing the length of time they remain unemployed. They receive on-the-job training and technical instruction, giving them practical experience and skills that can improve their long-term employability. Those who complete the program successfully are issued a credential they can use to demonstrate their competency to future employers. This combination of elements targets factors we know are vital to ensuring that individuals remain employed and have successful careers.

By showing that registered apprenticeship makes workers better off than they would have been otherwise, our study adds to a growing body of evidence that uses North Carolina’s CFS data and scientific research methods to determine “what works in workforce”.