Quarter 2 data from the Quarterly Census of Employment and Wages (QCEW) were recently released, and as expected provide a stark contrast to the first quarter of 2020. As the impacts of the pandemic began to be widely felt in the early spring of 2020, changes in consumer behavior as well as school closures and other restrictions on business activity led to an unprecedented drop in economic activity throughout the state and the nation. According to QCEW, North Carolina employers reported 500,000 (11%) fewer jobs in April than in March of 2020. Employers reported adding jobs in May and June, but job levels in June were still six percent lower than in March. This pattern of a precipitous decline followed by a partial rebound can also be seen in a variety of other labor market indicators including the number of employed people as estimated by the Local Area Unemployment Statistics (LAUS) program, and the jobs estimates calculated by the Current Employment Statistics (CES), as well as the rise and fall of initial unemployment insurance claims during this same period. 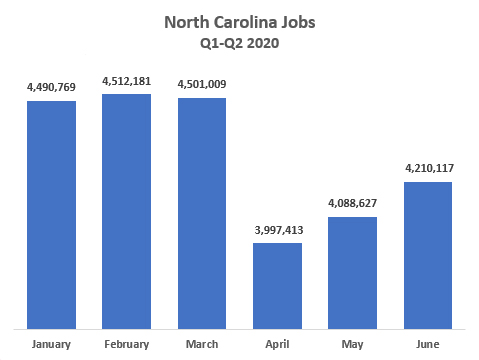 Of course, these rapid declines in April did not occur evenly across the state. The largest job losses occurred in the metro counties of Mecklenburg (82k), Wake (66k), and Guilford (36k), followed by Buncombe (25k) and Forsyth (22k).  As a percentage of March jobs, the counties with the largest percentage drops were Dare (25%), Alexander (21%), Watauga (20%), Yadkin (19%) and Buncombe (19%). While every county reported fewer jobs in April than in March, thirty-six counties lost jobs at a higher percentage than the state (11%).

The industry sector with the largest decline between March and April was Accommodation and Food Services, which reported 174,000 (41%) fewer jobs in one month. Other industries with large losses included Retail Trade (56k), Health Care and Social Assistance (53k), Manufacturing (48k), Administrative and Support (33k), and Arts, Entertainment and Recreation (31k or 43%), as the impacts from the pandemic began to be felt more broadly throughout the economy. Future blog entries in this series will take a deeper dive into these industries, recognizing that different types of businesses had varying experiences during this period.

LEAD, in partnership with the US Department of Labor’s Bureau of Labor Statistics, publishes two important measures of industry employment in North Carolina—the Current Employment Statistics (CES) and the Quarterly Census of Employment and Wages (QCEW). The CES estimates are produced monthly and are based on employer surveys, producing estimates of jobs, wages, and hours worked in various industries at the state and metropolitan statistical area level, although not at the local level. These monthly estimates are also preliminary and subject to revision. QCEW data, on the other hand, are derived from quarterly information provided by employers on their Unemployment Insurance Quarterly Tax and Wage report. Although the data is lagged by several months. QCEW provides a more detailed accounting of industry employment and wages. Because it is based on establishment-level reporting of most employers in the state, it can give us a detailed look at what was happening to employment and wages down to the county level and at more specific levels of industry.