In a world awash in economic uncertainty, we all rely on dependable sources of information to guide our decision making. Data from government agencies such as the U.S. Bureau of Labor Statistics (BLS) offer a reliable and unbiased reading on the condition of our economy and the health of our labor market. However, these data should be interpreted with caution when they are first reported in the news media, as they are often released in preliminary form and are subject to revision.

Each year around this time, the BLS publishes revised historical data on state-level job growth and unemployment rates. These annual revisions use standardized methodologies to incorporate information that was not available at the time of initial publication into the official statistics. While these revisions are necessary to ensure our understanding of the economy is as accurate as possible, they sometimes tell a story about our economy that conflicts with the preliminary estimates that are covered extensively in the news media.

In this article, we summarize recently published revisions to North Carolina’s economic data and discuss their implications for labor market watchers.

Some commentators expressed concern about a notable bump in North Carolina’s unemployment rate early last year. On a preliminary basis, our unemployment rate rose one half of a percentage point, from 3.7% to 4.2%, between December 2018 and June 2019. This increase led one nationally syndicated news outlet to report that North Carolina may have entered a recession.

It turns out that all this handwringing about our preliminary economic numbers amounted to much ado about nothing. Revised data now show a much smoother trend in North Carolina’s unemployment rate than initially reported, with the only increase being a slight uptick of 0.2 percentage points between November 2018 and February 2019 [Figure 1]. 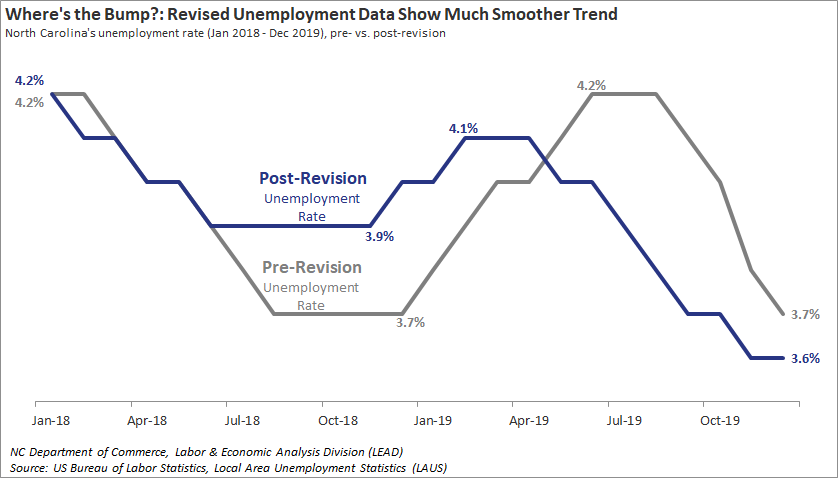 Revisions to our state’s jobs numbers have also amended the economic picture painted by the preliminary data. The impact of Hurricane Florence caused a sharp dip in the number of jobs in North Carolina. Revised data show that employment recovered more rapidly than suggested by the preliminary estimates, with a net increase of 79,700 jobs (+1.8%) between September 2018 and January 2019 compared to the approximately 56,900 job increase (+1.3%) initially reported [Figure 2]. 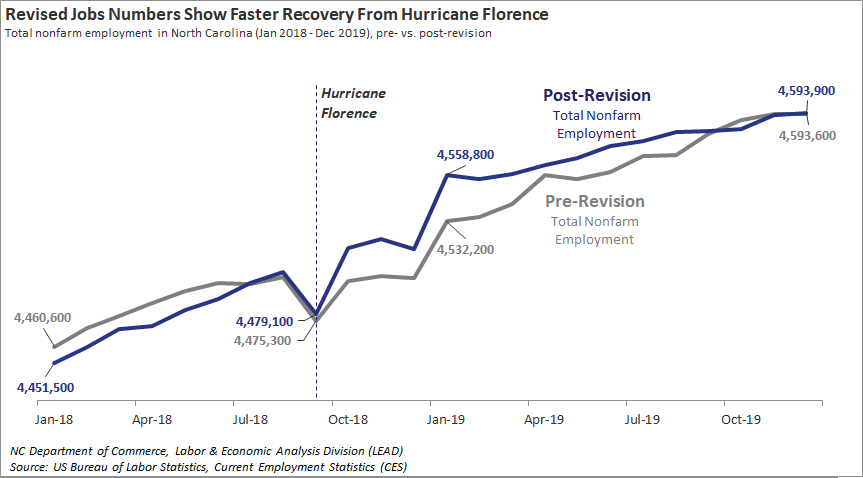 The extent of annual data revisions is even more apparent in particular sectors of our labor market. For example, preliminary estimates indicated that employment in North Carolina’s manufacturing sector grew by only 800 jobs (+0.2%) between January 2018 and December 2019, whereas the revised figures report a healthier increase of 8,400 jobs (+1.8%) over this time period [Figure 3]. On the other hand, trends in retail employment appeared considerably more favorable when they were first reported: preliminary estimates showed an increase of 7,400 (+1.5%) retail jobs between the start of 2018 and the end of 2019, compared to a decline of 4,700 (-0.9%) in the revised figures. 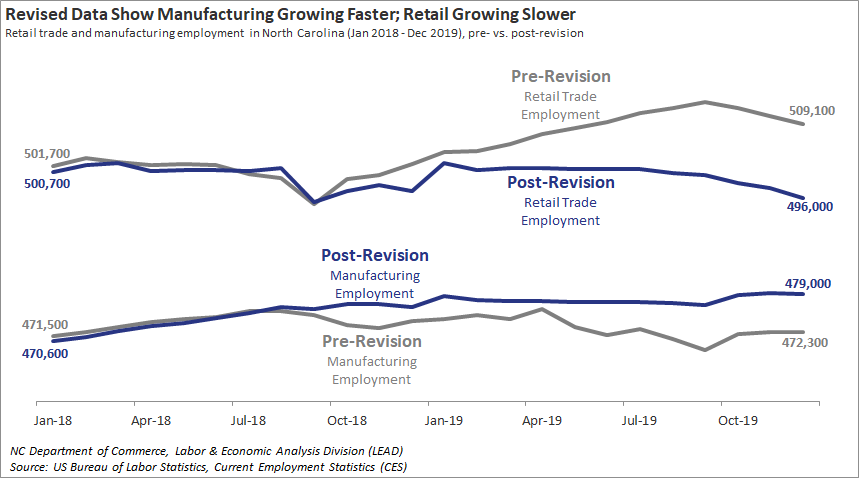 What does this mean for you and me? How can we understand what is happening in the world around us when economic statistics that are reported today are subject to revision at a later date?

It is important to acknowledge that no data point is perfect. Any effort to gauge economic conditions in real time is bound to be clouded by uncertainty. We recommend that you consult a wide range of high-quality information sources to guide your decision making. If all these indicators point in the same direction, then you can be relatively confident in the story they are telling. If these indicators contradict each other—e.g., if unemployment rates rise without a corresponding decline in job growth—then you should exercise caution before drawing conclusions about the state of the economy.

We also recommend that you be judicious when interpreting month-to-month movements in economic data and, if possible, focus instead on long-term trends. Monthly economic data are often noisy, subject to revision, and provide little information about the overall direction of the economy. Long-term trends are much more stable and less affected by data revisions, and they tend to provide a more reliable depiction of what is happening in our economy and stronger guidance about what to expect in the future.