Individuals with disabilities are over-represented in the prison system. The U.S. Bureau of Justice Statistics (BJS) found that 32% of state and federal prisoners had a disability in 2011-2012, compared to 15% of the general population. This disparity is rooted in a “school-to-prison pipeline” that traps young people with disabilities in a cycle of disadvantage, misconduct, and punishment, leading eventually to incarceration in the adult correctional system. In this article, we use data from our state’s Common Follow-Up System (CFS) to illustrate the extent of the “school-to-prison pipeline” for young people with disabilities in North Carolina.

We begin our analysis by following a cohort of 83,126 students who exited public high school in North Carolina, either graduating or dropping out, during the 2000 school year.1  Nearly 6.4% of these individuals entered a state prison in North Carolina within 18 years after high school—more than half of them (3.5%) within seven years [Figure 1]. Students with disabilities were much more likely than their peers without disabilities to land in prison within 18 years (12.8% versus 5.6%, respectively). Most of these students with disabilities were reported by the state Department of Public Instruction as having a specific learning disability, an umbrella category that includes dyslexia and dysgraphia.2 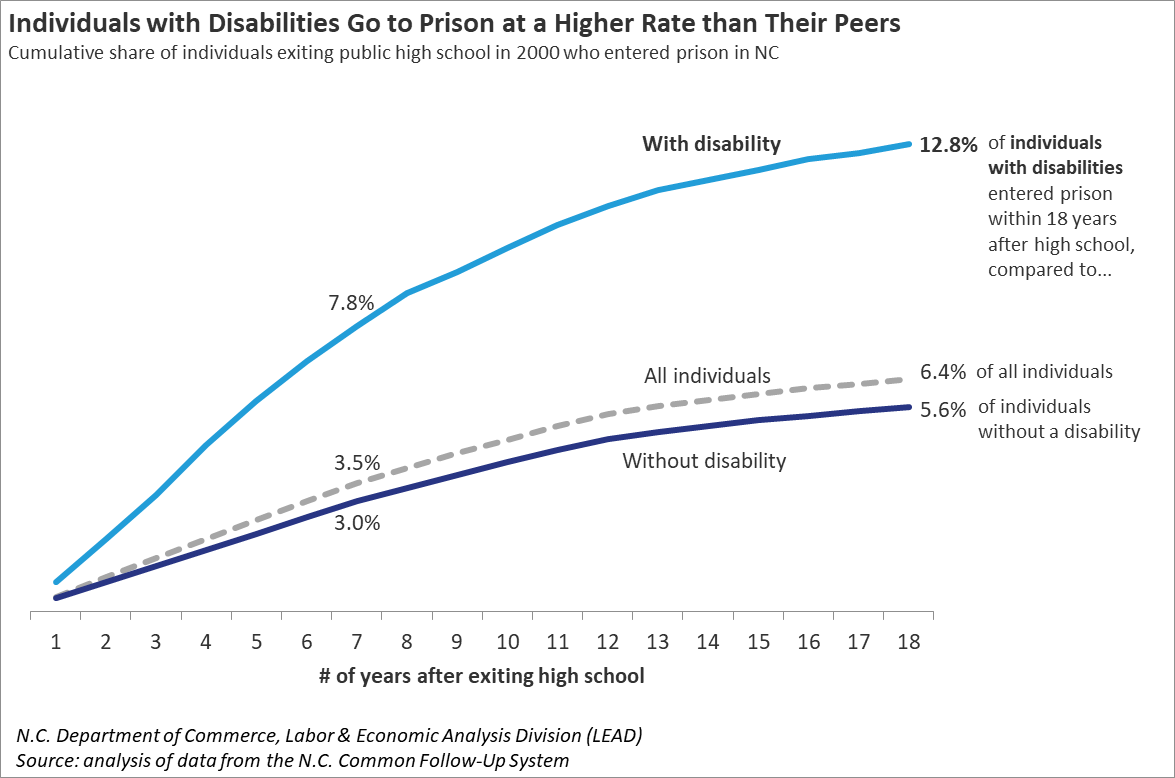 This disparity in incarceration rates is preceded by a disparity in high school graduation rates. The National Center for Education Statistics reports that, during the 2017 school year, students with disabilities in North Carolina had a four-year high school graduation rate of only 70%, compared to 87% for all students. Our own analysis of students who exited high school during the 2000 school year finds that only 33% of those with disabilities graduated upon exit, compared to 61% of their peers without disabilities.3 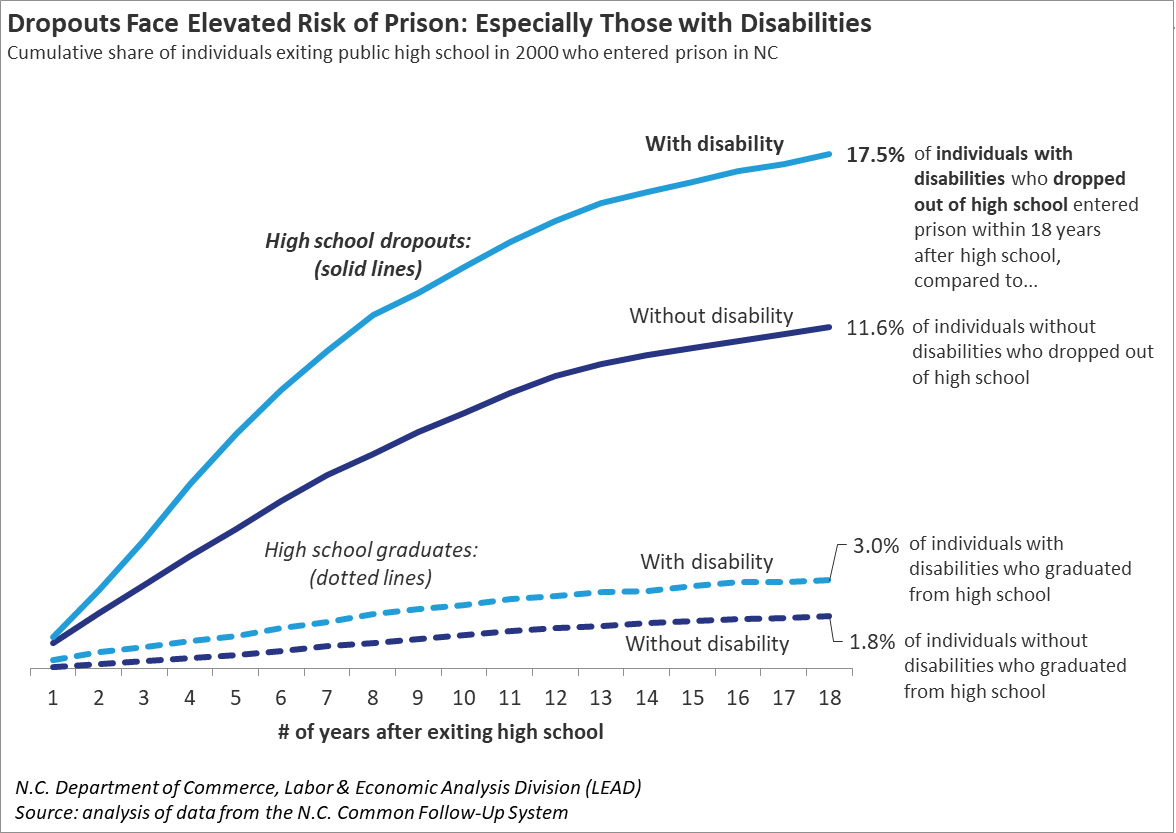 Although individuals with disabilities as a group are over-represented in prison, incarceration rates vary widely by type of disability. We examine this variation in more detail by following a cohort of 990,270 students who exited high school during the 2000-2010 school years.4 This multi-year cohort provides us with a larger and more representative sample for measuring incarceration rates by type of disability.

Overall, individuals with disabilities who exited high school between 2000 and 2010 were more than twice as likely to enter prison within seven years after high school than their peers without disabilities [Figure 3]. Those with behavioral/emotional disorders were the most at risk, with nearly 20% entering prison within seven years. Individuals with intellectual disability, specific learning disabilities, or traumatic brain injury also had a significantly elevated risk of going to prison. On the other hand, those with autism or orthopedic impairment were significantly less likely to enter prison than their peers without disabilities. The likelihood of individuals with visual impairment/blindness, hearing impairment/deafness, or speech impairment going to prison was not significantly different from their peers.5 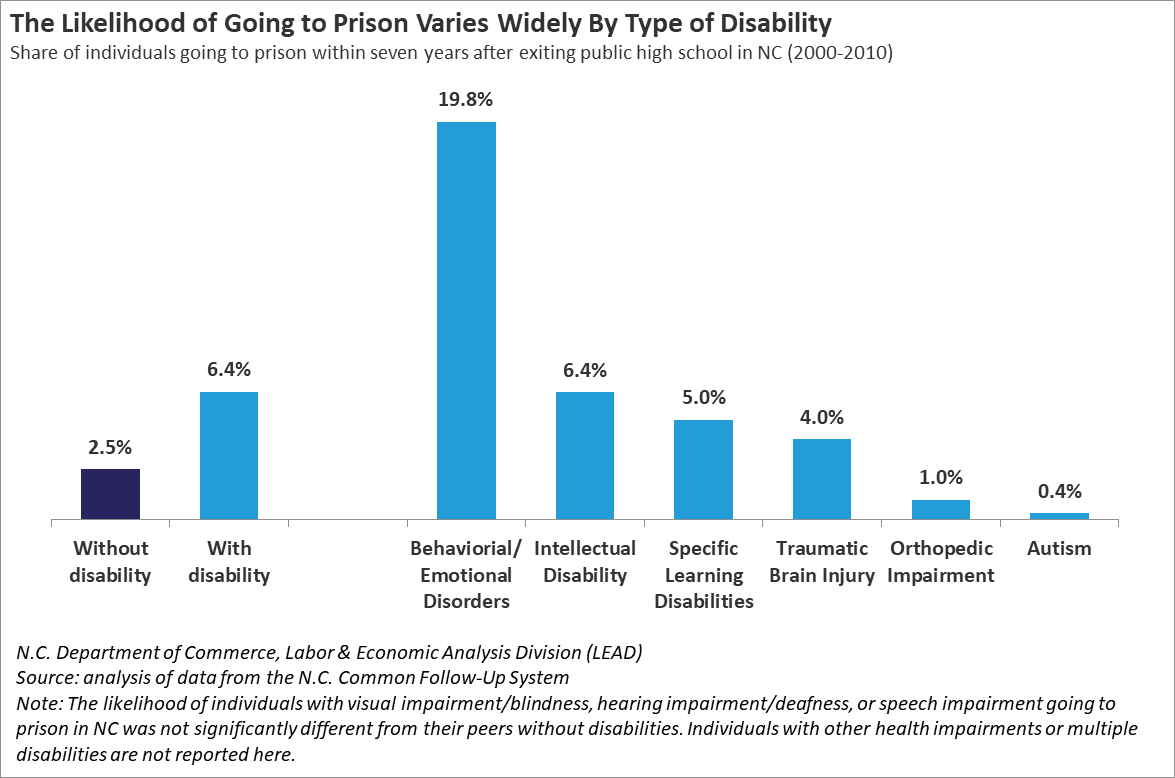 The school-to-prison pipeline for youth with disabilities is not only a human tragedy, it is also a workforce challenge. Our prior research demonstrated that former prisoners in North Carolina are much less likely to find employment after release than the broader population, depriving our economy of a potentially rich source of human capital. Our state’s educators, employers, and communities all have a stake in ensuring young people with disabilities are steered toward the pathway to opportunity and diverted away from the pipeline into prison.

1 This includes students who exited high school between July 1, 1999 and June 30, 2000. We use a single-year cohort—based on the earliest year of data available—in order to compare incarceration rates for a full 18 years after high school.

2 Nearly 11% of all individuals in our cohort students exiting high school during the 2000 school year had a reported disability. The most prevalent disabilities were specific learning disabilities (52% of all students with disabilities), followed by intellectual disability (23%), behavioral / emotional disorders (10%), other health impairments (7%), speech impairment (5%), and a smaller number of students with hearing impairment / deafness, multiple disabilities, orthopedic impairment, autism, visual impairment / blindness, or traumatic brain injury (all 1% or less).

3 For this analysis, we define “graduates” as individuals who exit high school as graduates in a given year, and we define “dropouts” as those who exit high school without graduating and do not re-enroll by October of the following year. The four-year “adjusted cohort” graduation rate reported by the National Center for Education Statistics is the share of a given cohort of 9th-graders who graduate within four years, with adjustments made for students who transfer into the cohort or transfer out of the cohort, emigrate to another country, or pass away.

5 Individuals with other health impairments or multiple disabilities are not reported here.