Can you believe we’re starting a new decade? As we are coming off of newscasts determining the best of the 2010s, I want to quickly point out a few things that the Census Bureau is doing that are not related to the vital 2020 Decennial Census (Make NC Count!).

The Census Bureau is now using a new platform to share data that will eventually replace a bunch of different tools, including the formerly ubiquitous American FactFinder. It’s https://data.census.gov, and it is growing in user friendliness on a daily basis.

It begins with a simple search field much like a Google, or Bing would, but you can also use tricks picked up from American FactFinder like applying filters based on geography and topic. 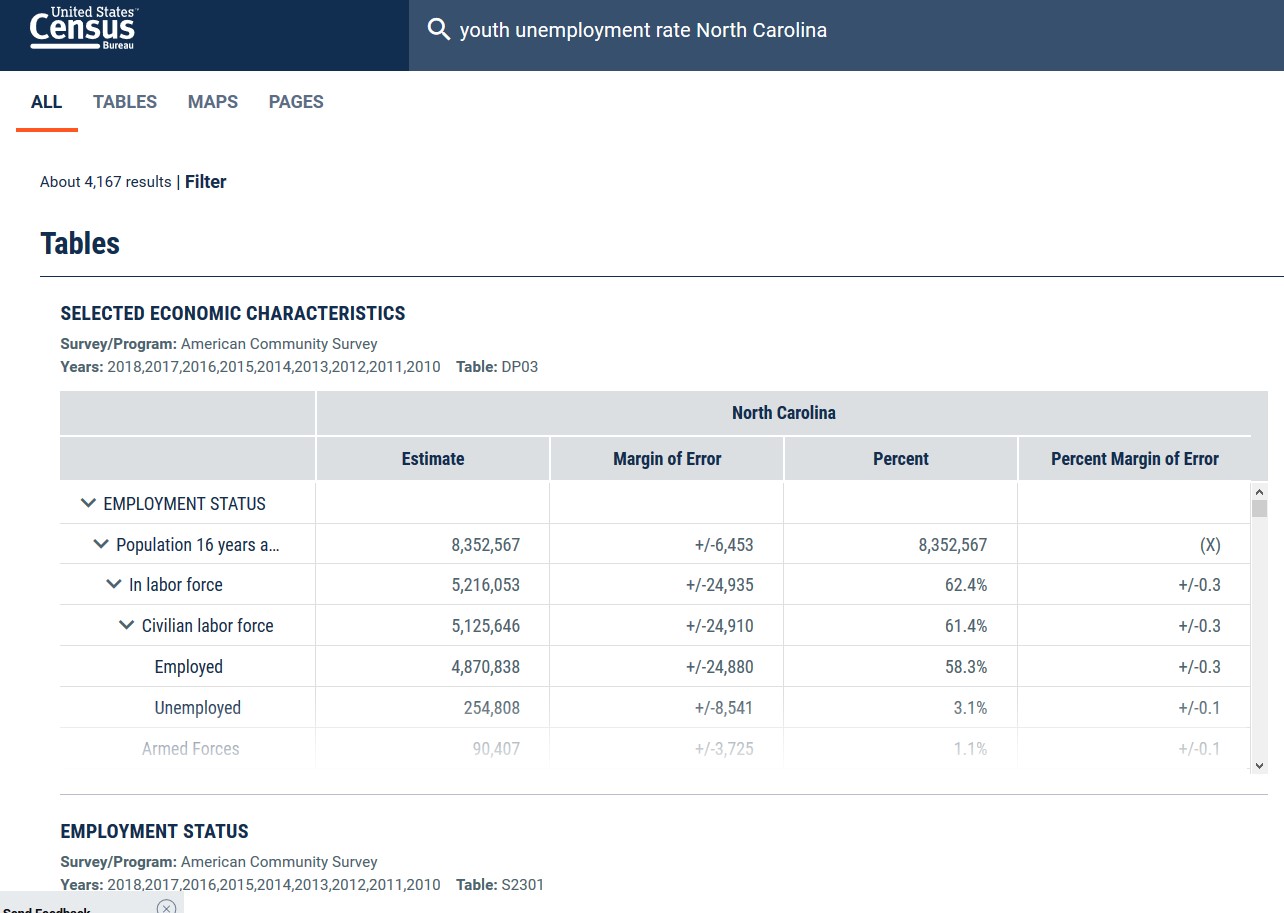 Mind you- this general ‘Demographic Profile’ table is a little too broad, but the second hit is ‘Table S2301: Employment Status’, which gives us unemployment rates for people aged 16-19 and 20-24 (2018 1-Year data shows the unemployment rates are 17.6% and 9.7% for these groups, respectively).

Now some of you may be thinking—I don’t need to know youth unemployment at the state level, but I really need this data at the county level. No worries- just type your query above with your county and/or filter by county…

…or work with all of the counties with the latest data! Recently, the Census Bureau released the 5-year American Community Survey data for 2014-2018. This covers the 5-year period, which may not be ideal for some circumstances, but is necessary to compare all of the counties across the state.  This is because the American Community Survey only releases 1-year data for population groups sized 65,000 or more. Not every county in North Carolina is quite that large (in fact, there are data lines only for 41 counties for table S2301 for the 1-Year 2018 data).  Also, because it’s drawing from 5 years of data, the margins of error are lower than for 1-year data.

For those interested, the estimates of the youth unemployment rate for the 2014-2018 time period vary by county from 0% in Clay and Hyde Counties to 54.5% in Martin County. Note- for small counties, Margins of Error are extremely high- 25.1% and 39.4% respectively for Clay and Hyde Counties, and 21.7% for Martin County. This means we need to take some of these estimates with a grain of salt and remember these are ESTIMATES, and not actual numbers. We can see how this looks in the map below: 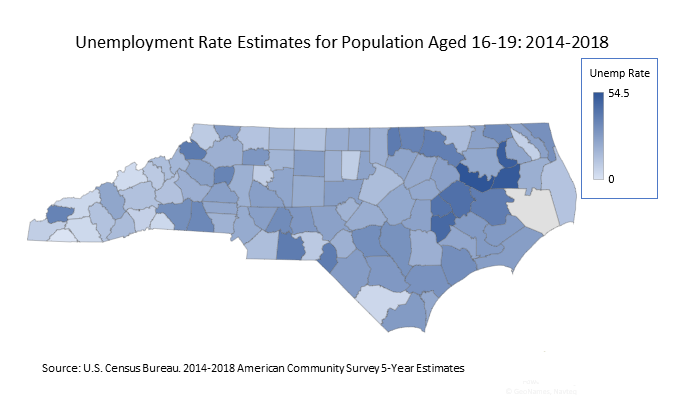 The Census Bureau released Population Estimates for 2019 at the end of the year. Unfortunately, this data has not yet been made available on the data.census.gov platform, even if some data tables are available elsewhere on the Census Bureau website.

Finally, the Census Bureau put together a great little data visualization for one-stop shopping for state level demographic and economic statistics using data.census.gov. The link to this is a little long, but just click it, or copy and paste it!:

There are a lot of cool statistics already collected and curated for you here, and there are pre-made maps for this, as well. As the data.census.gov website continues its development, there will be even greater mapping capabilities for your information.

While it may take getting used to the new platform, if you need any help with this or other Labor Market Information (LMI) and data questions, please do not hesitate to contact us at lead@nccommerce.com.