LEAD honors our veterans by doing what we do best: help people with information and data.  Here are some interesting data points regarding North Carolina Veterans from the new 2018 1-Year American Community Survey! (unless otherwise noted).  You can find these by typing in table names listed below into the Census Bureau’s new data tool:  data.census.gov:

There are 667,035 civilian veterans living in North Carolina

The number of living veterans that served during three wartime periods include (Table B21002):

The number of living veterans that served during two wartime periods include (Table B21002):

The following counties have more than 20,000 veterans residing within their county:

The following counties have the highest percentages of veterans (2013-2017 data): 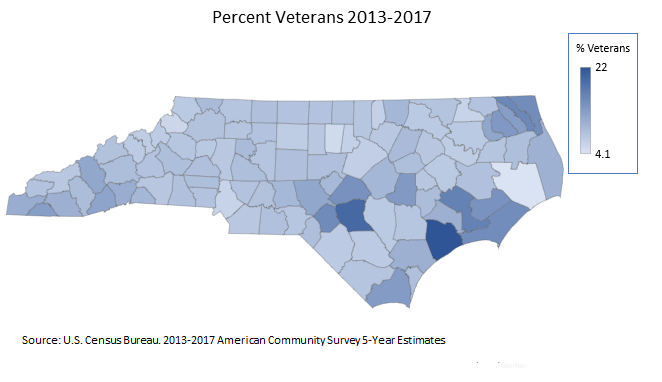 29.4% of Veterans had a Bachelor’s Degree or Higher.  This compares with 32.1% of Nonveterans.

187,972 have a service-connected disability rating

From 2013-2017, the following 22 counties showed veterans with lower unemployment rates than nonveterans (at 95% level):

There are no counties where veterans have a higher unemployment rate than nonveterans (at 95% level).