In 2018, North Carolina had the 11th largest state economy by GDP in the U.S. at nearly $566 billion.[1] The state’s real GDP increased 2.9% over the past year, matching the 2.9% growth at the national level. The Information industry sector experienced the fastest industry GDP growth in North Carolina over the past year (8.1%), while Manufacturing saw the largest level increase ($4.0 billion chained 2012 dollars). Over the past five years, the state’s real GDP grew 11.4%, while the U.S. economy grew 12.6%.

The two largest contributors to the state’s GDP are 1) the Finance, insurance, real estate, rental, and leasing sector and 2) the Manufacturing sector. Combined, these two industry sectors accounted for 38% of the state’s GDP in 2018. These industries have dominated North Carolina’s economy since the 1990s, but the gap between them has narrowed and reversed in recent years. Since 2014, the Finance sector has consistently been the largest contributor to North Carolina’s economy. 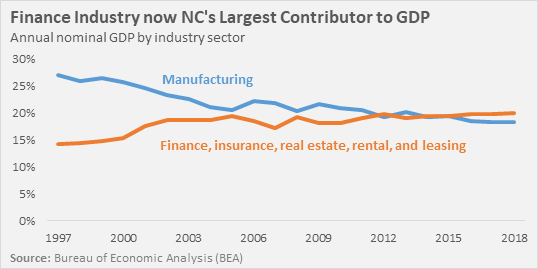 [1] All GDP data from Bureau of Economic Analysis.