LEAD recently completed our North Carolina Annual Economic Report: A Year in Review, 2018. This report summarizes the most recently available data on a variety of topics relevant to the North Carolina economy, including labor market participation, industry employment, and GDP growth. This article highlights the population growth portion of the report. 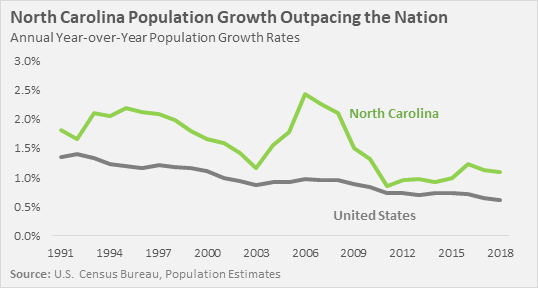 Looking back over the past several decades, the state’s population growth has been consistently higher than national growth. North Carolina’s annual growth rate peaked at 2.4% prior to the Great Recession, followed by slowing growth rates, which leveled out at about 1% from 2011 to 2015. The state has experienced a slight uptick in growth over the past three years, diverging from the mostly flat and declining U.S. annual rates.

From 2017 to 2018, the combined populations of Mecklenburg and Wake Counties grew by over 37,000 people, accounting for about 33% of the state’s net population increase. The Charlotte, Raleigh, and Durham Metropolitan Statistical Areas (MSAs) accounted for 63% of the state’s total growth between 2017 and 2018. Nevertheless, many North Carolinians still live in rural areas. As of 2010, 34% of the state’s residents lived in rural Census tracts, giving North Carolina the second largest rural population in the country.[2]