The benefits of completing a college degree have been extensively discussed in the literature, including our recent article about NC Community College System graduates. In this blog post we conduct a similar analysis for the University of North Carolina (UNC) System.

UNC graduation rates have shifted over the past decade. Higher admission standards, phased in from 2009 to 2013, resulted in an increase in overall System graduation rates (Figure 1). The UNC system’s current five-year strategic plan also targets improved 5-year graduation rates and increased efficiency of undergraduate degrees.1 To assess the importance of improving on-time completion and raising degree efficiency, we examine the wage differential between those completing a Bachelor’s degree from the UNC System schools and those who enrolled but did not graduate. The findings from our analysis indicate that college graduates are more likely to find work, and tend to earn higher wages, than those who do not finish college. 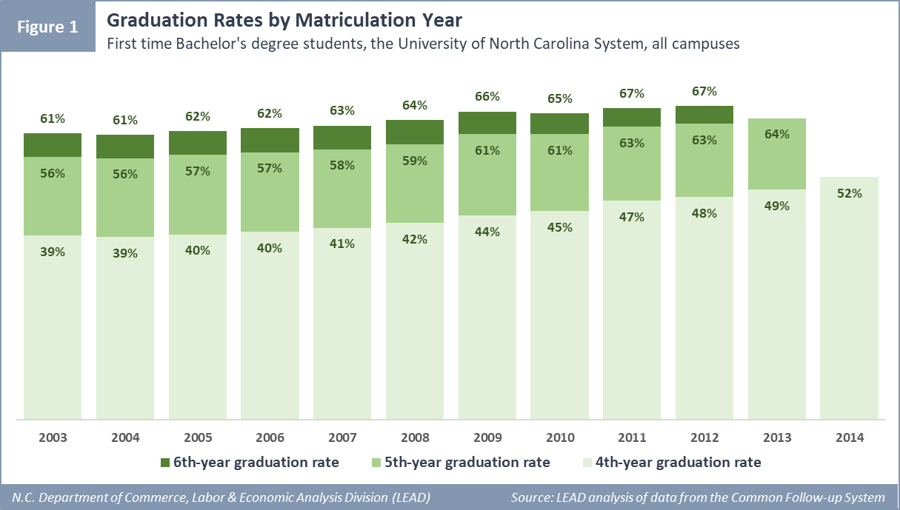 The analysis compares after-college outcomes between college graduates and students who, due to various reasons, were unable to finish their Bachelor’s degree. To define a study cohort, we take nearly 215,000 first-time undergraduates who matriculated at UNC between Fall 2005 and Fall 2009, and who had not enrolled in a Bachelor’s or higher degree program at UNC in previous years. Note that some of these students might have already earned or worked toward a lower post-secondary credential,2 either at UNC or another academic institution, and applied earned credit toward their Bachelor’s degree.

Figure 2 traces the college path of this cohort for almost a decade after enrollment. Looking at the entire UNC system, four- and six-year graduation rates were 42% and 64%, respectively,3 although the numbers may differ across UNC campuses. Approximately 1.5% of graduates earned more than one Bachelor’s degree in different fields within six years. About 9% of students from the initial cohort continued their studies at the graduate level, pursuing Master’s or Doctoral degrees. Even after six years, many students were still found in college – either returning graduates working on another Bachelor’s degree in a different field, or those who took extended time off but ultimately completed their studies. Counting the latter, the overall completion rate would increase to 68% over the course of nine years.

While the majority of the cohort finished their Bachelor’s degree, nearly 25% left the UNC system within four years after enrollment (defined as leavers). After six years the percentage of leavers increased to 28%, and eventually (after nine years) 30% of students had left school without a degree and had not returned to the UNC system. 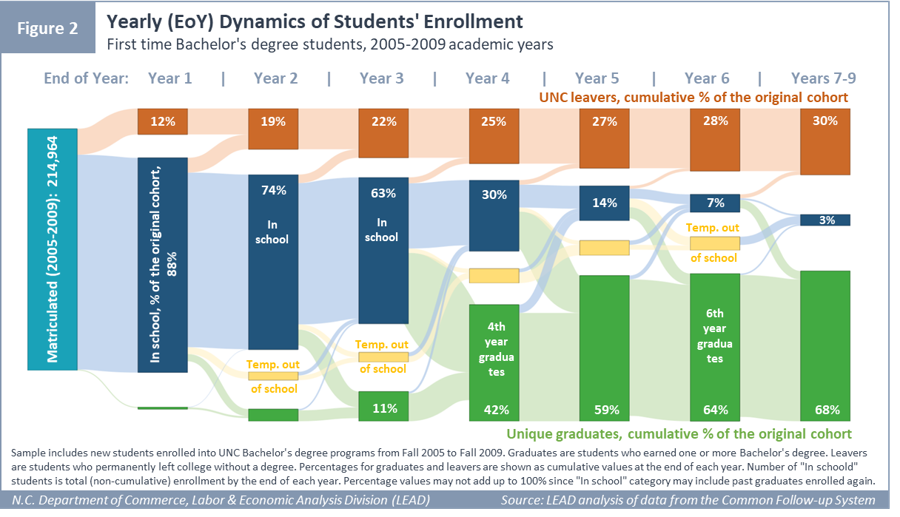 To measure the impact of college completion, we compare students who received their Bachelor’s degree within six years after enrollment to students who left the UNC system without receiving a degree, and did not return, within the same time period.4 Using data from the Common Follow-up System (CFS), we follow these students’ employment and earning outcomes5 three years after either the degree conferral date (for graduates), or the last semester of enrollment (for leavers). To enable a clean comparison, we exclude students who either returned to college or entered graduate school during this three-year follow-up period, and we exclude graduates who earned two or more Bachelor’s degrees.

As shown in Figure 3, college graduates exhibit higher employment rates immediately after graduation – 63% percent of graduates are employed in the first three months, compared to only 55% of those who left college before graduation (Leavers). Employment rates do not change much for either cohort during the following three quarters. 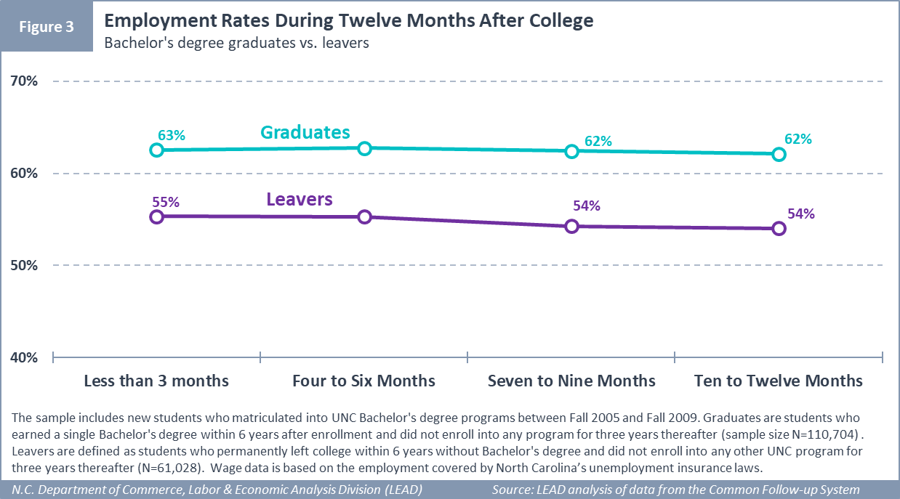 In line with other studies, we find that completing a college degree has a substantial association with future earnings (see Figure 4). The median wage of UNC Bachelor’s degree holders in the first year after graduation doubled the median wage of non-completers in the first year after leaving college. And over time the wage gap between these two cohorts keeps widening. 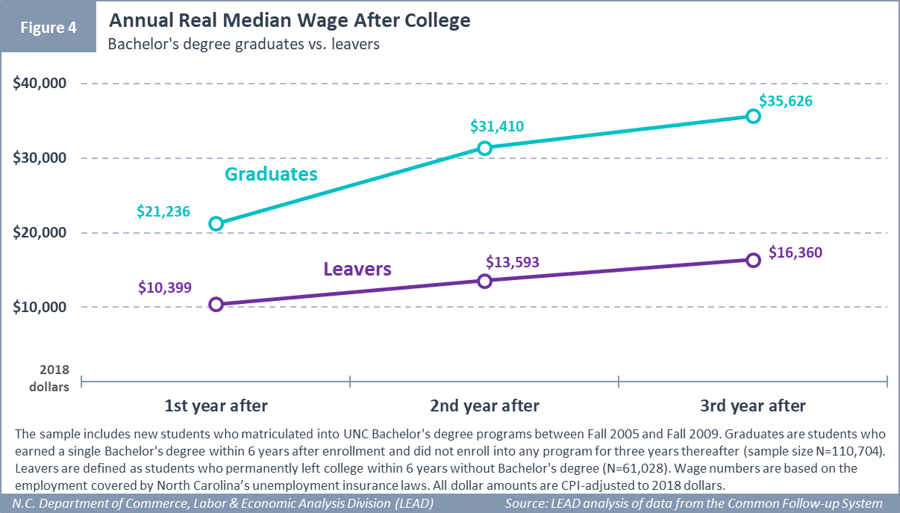 The analysis does not imply that all graduates will do better financially than non-completers (or leavers). Many students leave college with a promising career in mind or an existing (and well-paying) job offer in hand. Figure 5, rather than comparing median wage outcomes, shows the entire distribution of real wages earned by former UNC students – graduates as well as leavers – in their third year after exiting college.6 There are many non-completers making a good living at the higher end of the pay scale, as well as many graduates with relatively low wages. But, by and large, the wage distribution for graduates is clearly shifted to the right (higher wages) as the majority of graduates have higher earnings than the majority of students who left college without a degree. For example, 71% of college leavers made $25,000 or less compared to only 30% of graduates. More than a fifth (21%) of graduates earned $50,000 or more per year, while only 6% of leavers were able to attain that wage range. 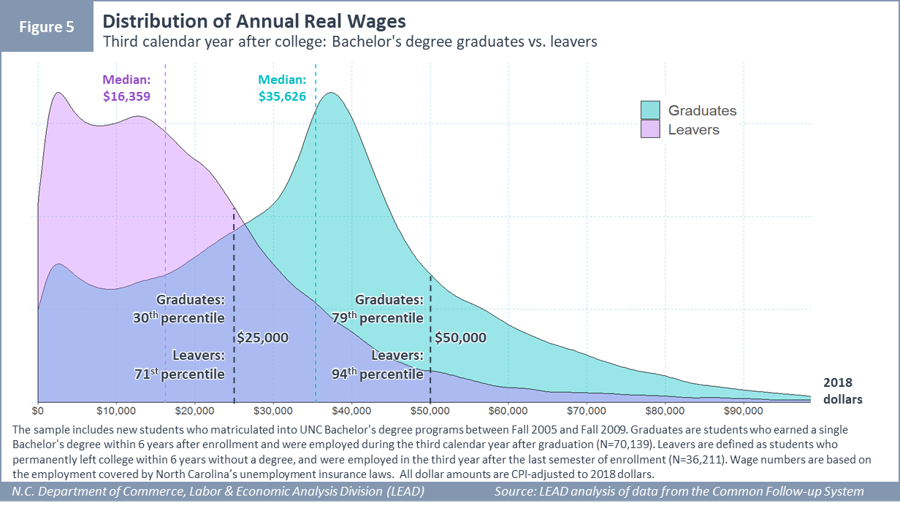 This analysis provides insight into the benefits of crossing the finish line and obtaining a Bachelor’s degree. Now, let’s take a closer look at how a college degree might influence someone’s career by comparing earnings before and after college. For this purpose, we selected students who had three years of non-interrupted employment before college and for whom we have data available for the three years following graduation or leaving school. It should be noted that graduates spent, on average, 3.6 years working on their degrees. At the same time, college leavers made their exit decision much earlier-- 1.9 years on average. Figure 6 accounts for this fact by aligning the time scale accordingly -- first-year post-graduation wages for completers are compared to what leavers earned in the third year after quitting college. 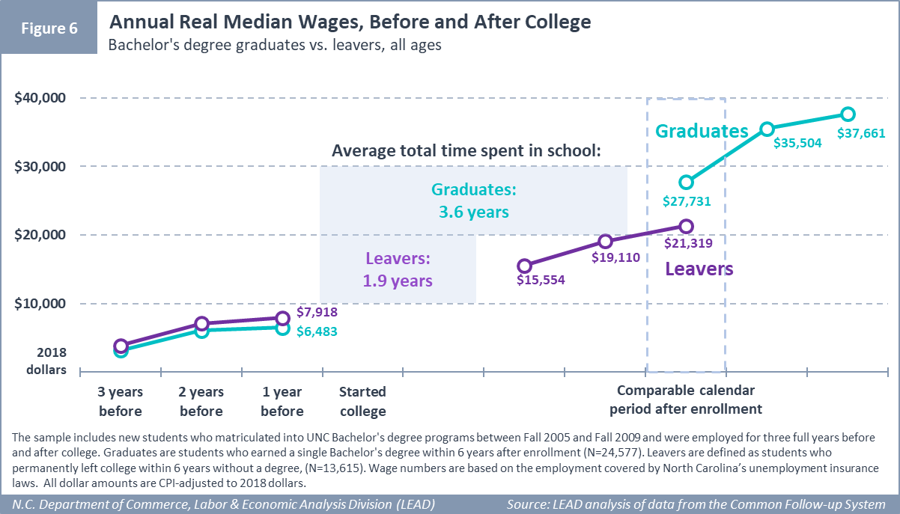 Figure 6 shows that prior to enrollment, upcoming college graduates earned slightly less than upcoming leavers. However, their post-college outcomes appear to be substantially different. In the first post-college year new graduates started off with a median wage of $27,731 – nearly 30% more than leavers’ median wage three years after quitting school ($21,319). And considering the wage progression rate of the graduates two years after leaving college, the difference in earnings is likely to get bigger.

For adult students who were 25 or older at the time of enrollment, pre-college median wages were comparable for both cohorts (Figure 7). When comparing post-college earnings, we again account for the different “time in school” between these two groups and match their time scales accordingly. Compared to students of all ages, nontraditional7 students tend to graduate somewhat faster (3 years on average) while the average time before leaving school hasn’t changed much for this cohort (1.7 years). Therefore, first and second year after-college wages for graduates are compared respectively to the second and third year wages for leavers. 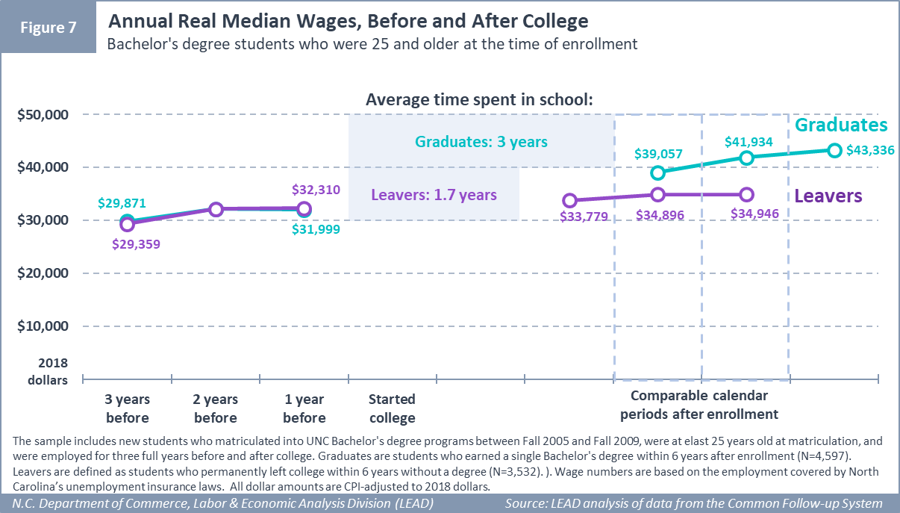 Although the post-college wage difference does not appear to be as striking as it was for students of all ages, nonetheless, an adult graduate with a Bachelor’s degree earned 12% more than a leaver without a degree who had an earlier start ($39,057 vs $34,896, respectively). Two years after graduation this difference would grow even bigger – to nearly 20% ($41,934 vs $34,946), as graduates’ wages exhibit stronger upward dynamics.

Overall, the findings from our analysis suggest that earning a Bachelor’s degree leads to higher employment rates in North Carolina and yields higher wages for the majority of graduates, as compared to college leavers.

1Undergraduate degree efficiency reflects the number of credentials awarded per 100 full-time equivalent students
2These credentials might include (but aren’t limited to) Associate Degrees, Post-Secondary Certificates, or Post-Secondary Diplomas.
3The method we used for the analysis requires us to track students’ outcomes several years after college, so our study cohort consists of students who matriculated at UNC before stricter admission standards were implemented (2009-2013). Due to our analysis method, reported graduation and non-completion rates in this analysis might be different from the most recent measures from UNC.
4Some students counted as ‘leavers’ might have transferred to other higher education institutions outside of the UNC System. Due to data limitations, we are unable to track individuals who leave the UNC System and enter a private or out-of-state college.
5Wage data in the CFS are based on state unemployment insurance (UI) tax records from employers, and thus may omit earnings from federal government employment, self-employment, church and religious organization employment, military enrollment, “under-the-table” jobs, and other work not covered by state UI laws.
6We assume that the third year would be a representative comparison period by which majority of students find steady employment.
7Postsecondary students who are 25 years old and older (National Center for Education Statistics).