Former offenders are primarily employed in industry sectors that are relatively low-paying or slow-growing. This article describes the sectors where individuals recently released from state prison tend to find work, including their pay levels and growth prospects, and lists some promising entry-level occupations incarcerated persons might want to consider as they prepare to re-enter the labor market.

North Carolina’s labor market has grown very tight in recent years as the number of jobseekers has failed to keep pace with growth in job openings in our state. This tightening has occurred across-the-board, covering nearly all occupations and impacting even those populations that typically face barriers to employment, such as individuals re-entering the labor market after prison.

Although persons recently released from prison are having better luck landing jobs than they did during the Great Recession, those who are hired tend to earn very low wages overall. For example, in 2014—the most current year for which we have data on prison releases—they earned a real median wage of around $5,500 the year after release, compared to $25,800 in annual earnings for the typical worker in our state.1 Some of this disparity can be attributed to the types of workplaces where ex-offenders tend to be hired.

In 2014, recently-released prisoners were mostly—and disproportionately—represented in four industry sectors in our state: Administrative and Support Services; Food Services and Drinking Places; Specialty Trade Contractors; and Food Manufacturing.2 They were also highly under-represented in sectors like Hospitals, Ambulatory Health Care Services, and Professional, Scientific, and Technical Services—a point we return to at the end of this article.3 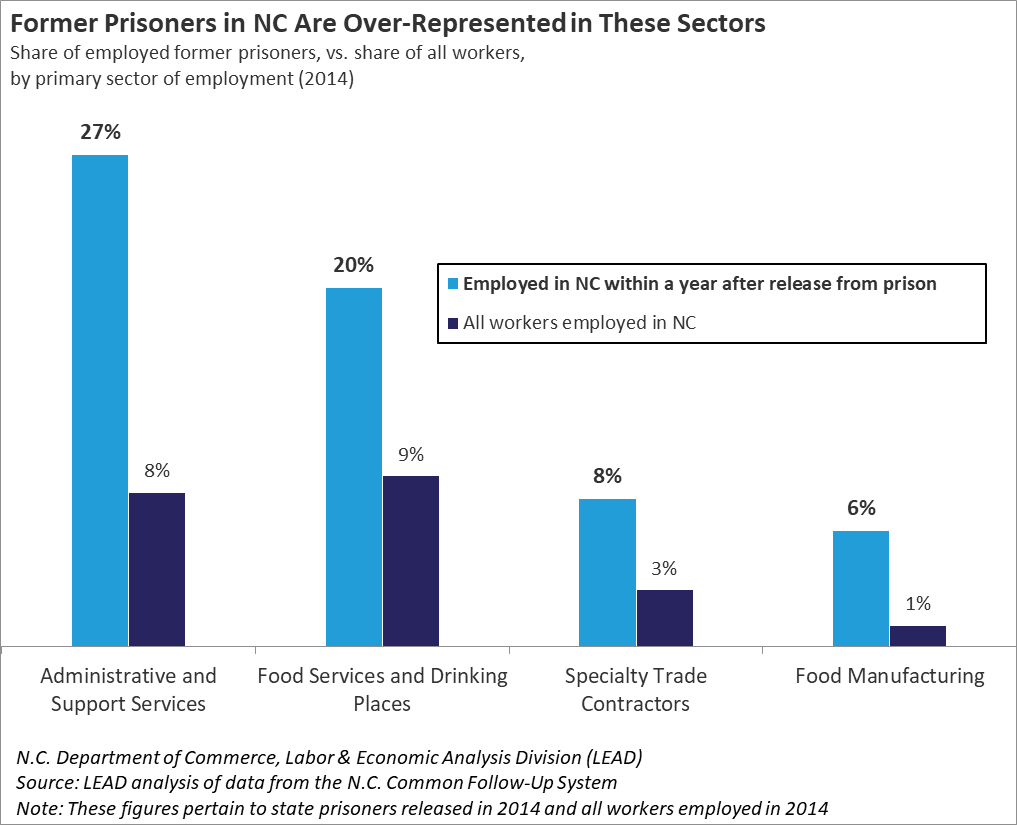 Several of these sectors pay relatively low median wages—as low as $9.11 per hour at Food Services and Drinking Places. The most prevalent sector of employment for those recently released from prison, Administrative and Support Services—which consists of a diverse group of occupations such as janitors, groundskeepers, laborers, and team assemblers—is also characterized by nonstandard employment arrangements, such as temporary jobs, that often provide workers lower pay and fewer benefits than permanent, career-oriented jobs. Specialty Trade Contractors stands out among these sectors, paying an hourly wage ($18.06) slightly higher than the statewide median of $16.71. 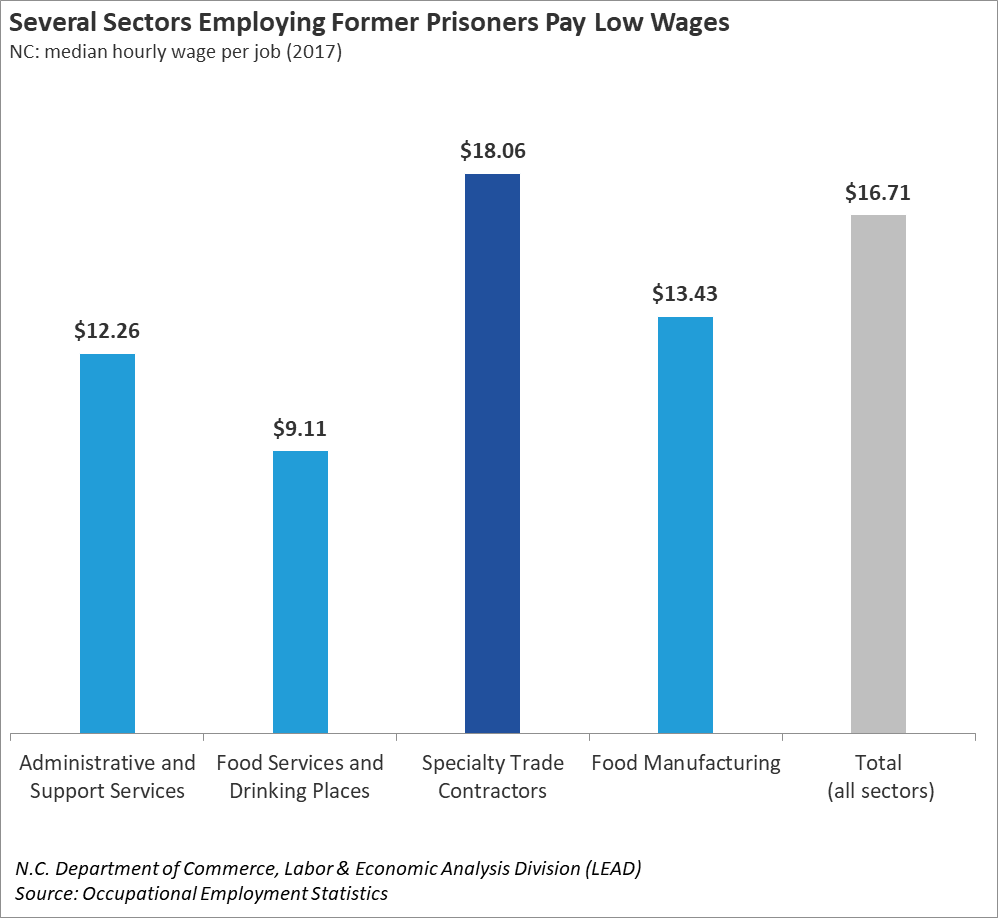 The future growth prospects of these sectors are mixed. Employment in the two lowest-paying sectors—Administrative and Support Services and Food Services and Drinking Places—is projected to grow much faster than the statewide average in the coming years. However, the two higher-paying sectors—Specialty Trade Contractors and Food Manufacturing—are projected to grow slower than the statewide average. 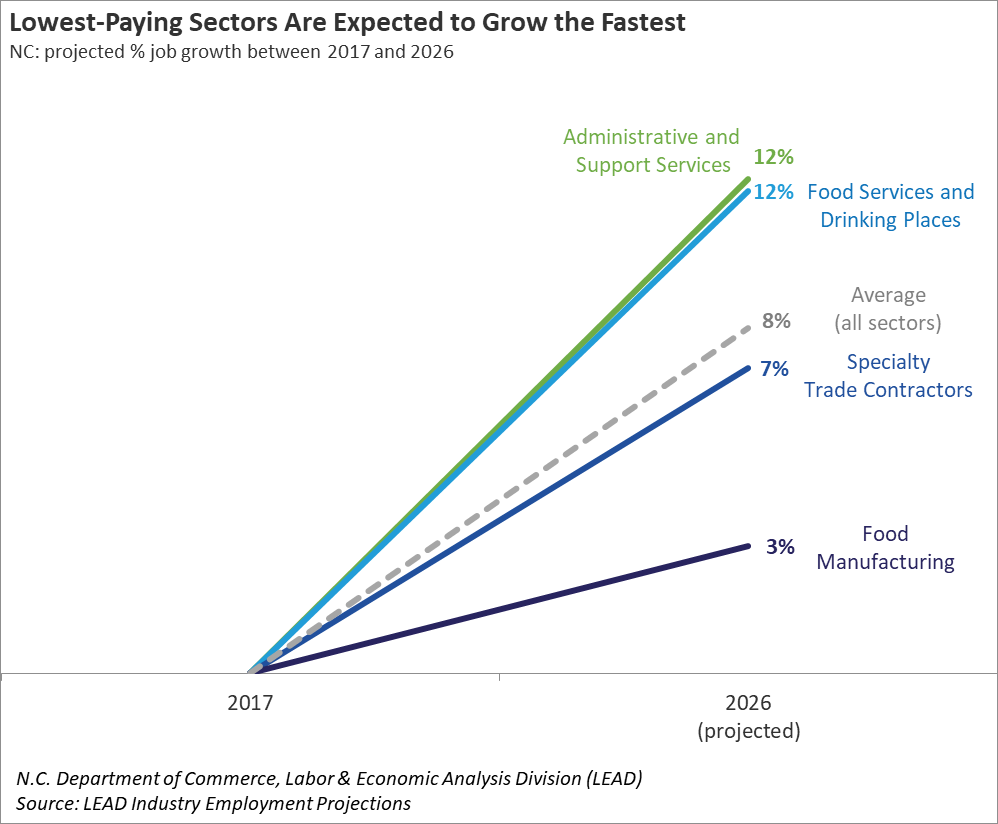 In the meantime, with the labor market as tight as it currently is, individuals recently released from prison should have a better chance securing work in any of these sectors than they’ve had in at least a decade.

Our labor market offers opportunities for gainful employment across all sectors, but it’s no accident that recently-released prisoners are concentrated in certain sectors of our economy. Individuals exiting prison face numerous obstacles to accessing jobs traditionally closed to former offenders. They tend to have low rates of formal employment before entering prison, potentially restricting them to the “entry-level” job market after they are released. They also tend to have low levels of educational attainment before entering prison,4 limiting the types of jobs they can access in our increasingly knowledge-driven economy. Previous research has found that employers are particularly reluctant to hire former offenders in professional services or in roles that involve customer contact. Finally, many of the highest-paying jobs require a professional license, and although North Carolina state law prohibits the automatic denial of licensure to those with a criminal history, such a history—especially if involving serious crimes—can be used as a factor in making licensure determinations.

Despite these barriers, the NC Commerce Reentry Initiative and other organizations that assist jobseekers with criminal records offer numerous services that can help them prepare for and obtain jobs in “in-demand” fields where former offenders are under-represented. So where else might individuals released from prison find work, other than those sectors that traditionally hire former offenders?

LEAD’s Star Jobs ratings can help jobseekers identify promising occupations based on the wages they pay, their projected growth rate, and their projected number of job openings.
Below we list a selection of 5- and 4-star jobs—the highest-rated occupations in our state—that offer good entry-level career opportunities for workers with only a high school diploma (or less), and report their median hourly wage in 20175:

Some of the highest-paying jobs on this list are in sales-related occupations, which often involve extensive customer contact. Jobseekers in these fields will likely need to overcome employers’ apprehensions about hiring former offenders, and should demonstrate that they have the persuasiveness, presentability, and other “soft skills” needed to succeed in these roles. Also note that, despite the low educational requirements for entering these occupations, some like Insurance and Real Estate Sales Agents require professional licenses, and applicants to these positions may need to present evidence, such as character references, to demonstrate that their criminal history does not warrant denial of a license.

There are even better-paying entry-level jobs available for those who attain some post-secondary education short of a Bachelor’s degree (e.g., a 2-year Associate degree):

Note that these jobs are concentrated in Hospitals, Ambulatory Health Care Services, and Professional, Scientific, and Technical Services—sectors in which formerly incarcerated individuals are highly under-represented. The healthcare jobs listed here all require professional licenses, in addition to their educational requirements. And while information technology jobs have fewer licensure requirements, jobseekers with criminal records may encounter hesitancy from employers who are unaccustomed to employing former offenders at these types of workplaces.

1These wage amounts are adjusted to 2017 dollars using the Consumer Price Index for All Urban Consumers. Source: author’s analysis of data from the N.C. Common Follow-Up System.

2Here we categorize workers by their “primary sector” of employment—the sector in which a worker earned the most wages in each year. We calculate wage earnings in the year after release from state prison and treat any wage-earning during this year as an indication of employment. Wage data in the CFS are based on state unemployment insurance (UI) tax records from North Carolina employers, and thus may omit earnings from federal government employment, self-employment, “under-the-table” jobs, employment in other states, and other work not covered by North Carolina UI laws. Around 3% of released prisoners are released from more than one period of incarceration in a given year; for these persons, we include only the last release of each year.

3Hospitals, Ambulatory Health Care Services, and Professional, Scientific, and Technical Services together represented around 4% of employed former offenders, compared to 14% of all workers.

4Only 29% of prisoners released in 2014 had completed the 12th grade or higher when admitted to prison. Source: NC Department of Public Safety, Automated System Query

5We list only those occupations with reportable wages. Source for wage data: Occupational Employment Statistics