LEAD’s new long-term employment projections for North Carolina (Projections to 2026) are out – and they may surprise you.  The biggest changes are not necessarily in the growth projections of specific industries or occupations, but in the time period (nine years instead of ten) and the significant increases in job openings.  Now, total openings in national, statewide, and sub-state levels more accurately account for the way people work and change jobs, and will impact North Carolina’s projections going forward.

The world of work continues to change towards a service-based economy where workers do not stay in one job with one company over the course of their working lives.  We can all come up with examples of people who start working in one occupation and then switch occupations over time as they get more training or potentially get promoted to management.

Sam grew up in Warren County. After graduating high school, she began working as a bank teller and stayed in that occupation for five years before leaving her job to further her education and enroll as a full-time college student at East Carolina University. She spent the next four years as a college student.

After graduating, she reentered the labor force and found a job as an accountant. Eight years later, she landed a job in a new occupation as a human resources specialist. She spent 15 years in HR before being promoted to financial manager, where she worked 12 more years before retiring.

Both national and state employment projections have evolved to more accurately capture careers like Sam’s, starting with the 2016-2026 U.S. projections the Bureau of Labor Statistics released last year.

The previous Replacement methodology relied on assumptions where people did not change occupations over the course of their career, and workers who need to be replaced due to retirement were replaced by workers from often younger cohorts.

The new Separations methodology captures a more accurate picture of workforce separations and distinguishes between workers who leave the labor force entirely (labor force exits) and those who change jobs and leave an occupation (occupational transfers).  Explanatory resources and a fun video with Sam’s experience can be found here.

The new methodology has three key advantages: more clarity about what is being measured, more robust methods, and more reliable results.

‘2017’ is not a typo: we decided to update the starting (or ‘base’) year of our long-term projections for the state and upcoming sub-state projections to 2017, representing a 9-year projection.  Over the summer, we evaluated competing models and determined that the best way to produce updated projections was to use 2017 Annual QCEW data to inform our base year estimates.  These updated 2017-2026 projections rely on the solid 2016-2026 projections, but provide greater value by being more current.

While the numbers generated by the separations methodology strictly should not be compared with the earlier replacements methodology, we will see the average numbers of openings increase due to the separations figures often being significantly larger than the earlier replacement figures.  While the new measures will give more information, please note that these openings should not be used as specific targets, but treated as trends meant to inform general growth or decline.

To help you get a visual sense of how the separations methodology operates, we have created a fictional example of an occupation: 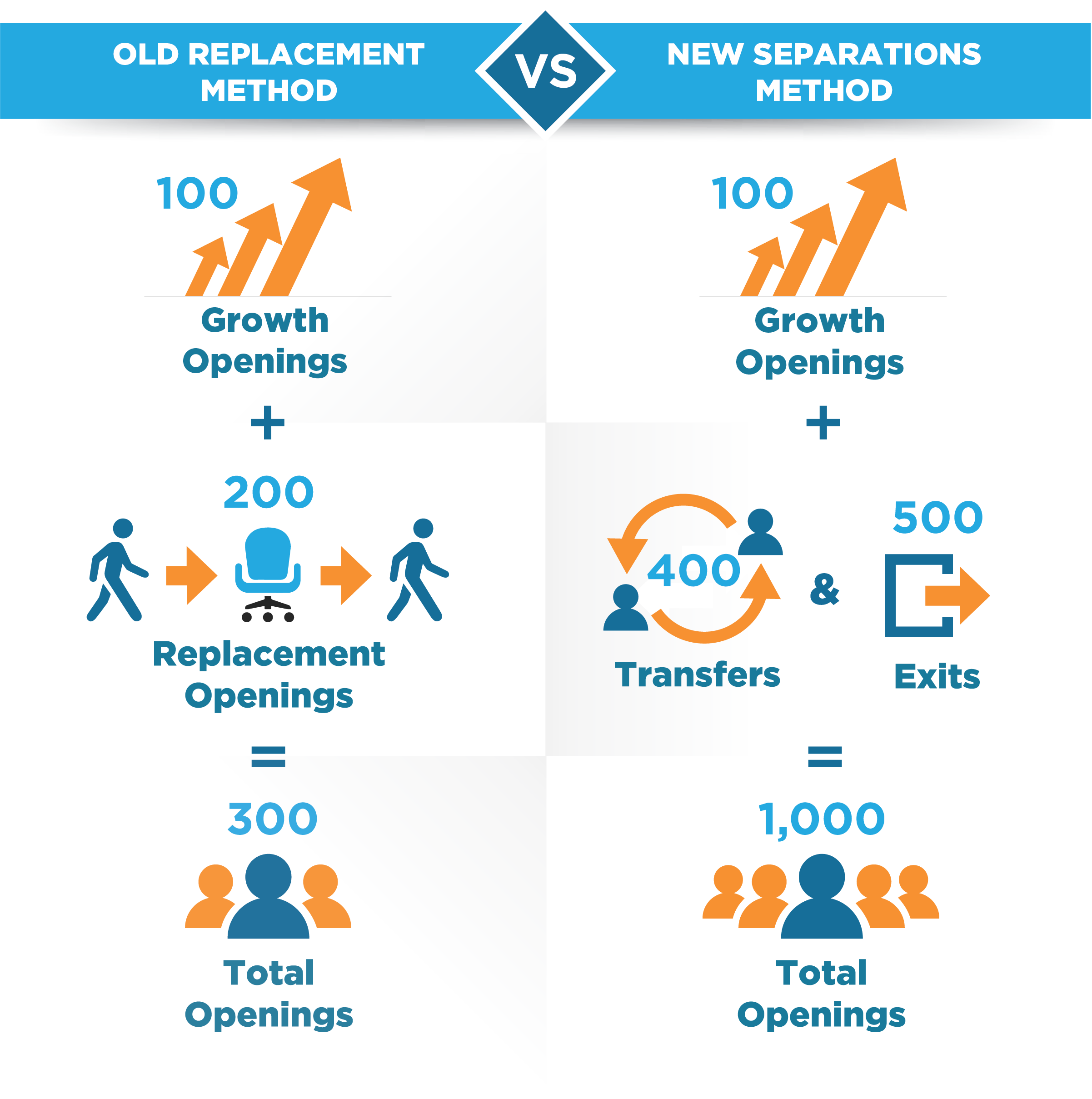 Under the old replacement method on the left side, we have 100 growth openings based on new jobs created and 200 replacement openings to replace leavers.  Together, these would add up to 300 total openings.

Under the new separations method, we still would have 100 growth openings based on new jobs created, but what had been considered ‘replacement’ openings would be measured as occupational transfers (400) and occupational exits (500).  Together, these would add up to 1,000 total openings.

To use another example with real data from North Carolina, we can look at Human Resource Assistants (SOC 43-4161).  Below is a chart comparing their Annual Projections Statistics using Replacement and Separations for 2014-2024:

As we can see, the new methodology yields a significantly greater amount of Annual Total Openings than the old methodology, but it more likely captures the potential openings based on those switching occupations and those that are leaving the labor force after working in this occupation.

The different measures yielded from the different methodology will have implications for our career products such as Star Jobs, which relies on openings.  LEAD has conducted research into this before our new Star Jobs lists will be published to ensure consistency in our measures of quality career opportunities.  As this updated methodology will be used going forward, we will continue to see larger numbers of total openings as well as measures of occupational exits and transfers for our sub-state projections to be released in early 2019.

If you have further questions about this change, please consult with https://www.bls.gov/emp/documentation/separations-faqs.htm, and/or email us at lead@nccommerce.com.