Do ex-offenders find gainful employment after they are released from state prison in North Carolina? And how does this compare to their status prior to incarceration? This article uses data from the North Carolina Common Follow-up System (CFS) to describe the workforce experience of offenders before and after incarceration.

Previous research from LEAD examined the short-term outcomes of ex-offenders released from prison, finding that North Carolina’s improving economy has helped bolster their job-finding prospects. However, those released from prison in recent years are still seeing lower employment rates and wage earnings than other populations, suggesting that they continue to face barriers in the labor market. Academic research has shown that incarceration can have a negative impact on employment and wages, and a recent report found that the jobless rate of former prisoners is nearly five times higher than for the overall labor force.

In this article, we take a closer look at the outcomes of former prisoners by tracking two cohorts over time—those released in 2007, just before the Great Recession, and those released in 2011, at the outset of the economic recovery—and reporting their employment rates and wage earnings in the five years prior to and after incarceration. This analysis demonstrates that offenders not only have poor outcomes after release from prison, but also have low employment rates and wage earnings before they enter prison.

We start by providing some context about these two cohorts, each of which included around 25,000 ex-offenders. Over 90% of this group was male, and their median age was 33, putting them in the “prime working years” during which men typically experience wage gains as they progress in their careers. This group also had low levels of educational attainment upon admission to prison, with fewer than 3% having completed any post-secondary education. They had been incarcerated for a median of six months at the time of their release, meaning they likely faced similar labor market conditions upon release as they faced prior to incarceration. (There were no appreciable differences between the 2007 and 2011 cohorts along these dimensions.)1

The workforce status of offenders during both their pre- and post-incarceration period depended in part on the state of the labor market. The cohort released during the economic good-times of 2007 saw a relatively high employment rate prior to and after release, which then fell precipitously as the Great Recession unfolded. On the other hand, those released near the start of the recovery in 2011 saw declining employment rates in the years prior to incarceration, followed by a gradual improvement after release as economic growth picked up. Nonetheless, both cohorts had lower rates of employment in North Carolina five years after release than they did five years prior to incarceration. Moreover, both their pre- and post-release employment rates were much lower than other populations entering the labor force. For example, 76% of students graduating with an Associate’s Degree from North Carolina community colleges in 2006-2007 and in 2010-2011 were employed in-state five years after completing their degree.2 (Note that these data only include formal jobs, and may omit self-employment or “under-the-table” jobs.3) 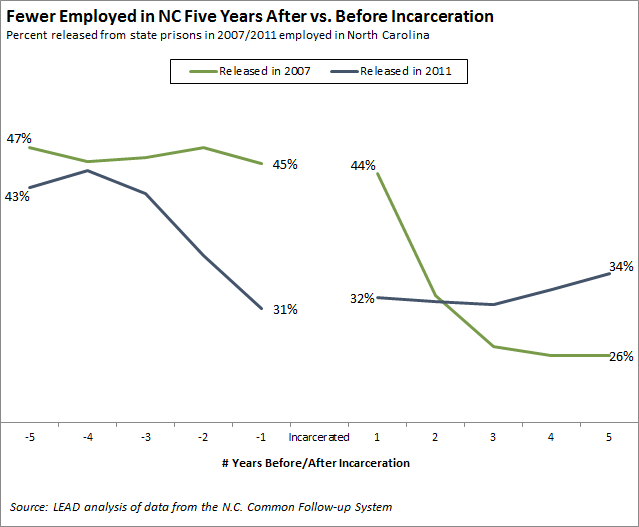 Offenders experienced very low wage earnings prior to incarceration, and tended to see wage increases in the years following incarceration, with annual wages quickly surpassing pre-incarceration levels. This progression in wage earnings is to be expected given the “prime working age” at which these former prisoners are released. However, even five years after release, their annual wages remained very low compared to the rest of the workforce. For example, those released in 2011 saw a real median wage of around $8,000 five years after release (i.e. during the period around 2016)4; estimates of the real median annual wage for all workers in North Carolina in 2016 ranged from around $27,000 to $31,000.5 The state of the labor market also played a role in ex-offenders’ wage outcomes: those released in 2011—during the economic recovery—saw a 73% increase in real wages between five years before incarceration and five years after release, while those released in 2007 had a wage increase of only 32%. 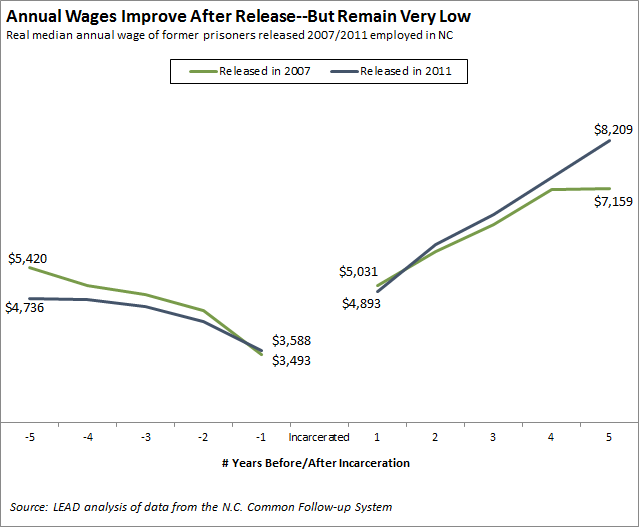 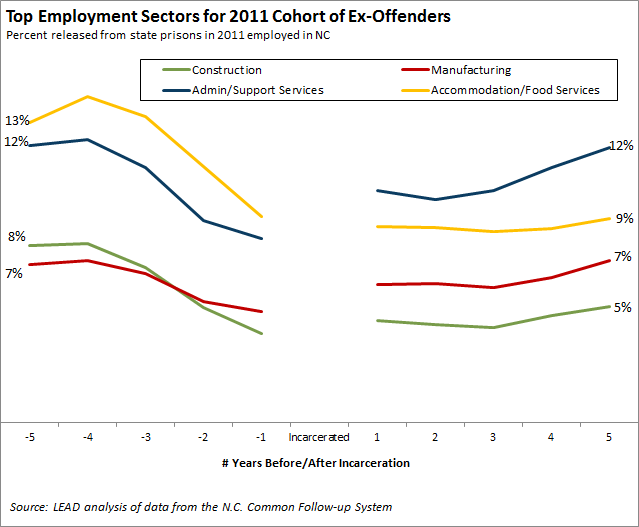 This article confirms our previous findings that ex-offenders have better employment and wage outcomes when the economy is growing, but that these outcomes have tended to be poor even during economic good-times. We add to these earlier findings by noting that offenders also saw low employment rates and wage earnings prior to incarceration, suggesting they may have barriers to employment that preceded their time in prison.

Numerous barriers must be overcome in order to connect ex-offenders to gainful employment. For example, a history of criminal conviction can be a direct impediment to obtaining employment, due to the stigma of a criminal record and professional licensing and bonding requirements. Incarceration can also indirectly hamper job prospects by disconnecting offenders from the labor force—particularly during the prime working years when skill development and career progression often occurs.7 Moreover, barriers to employment that existed prior to incarceration—such as a low level of educational attainment—may continue to compound ex-offenders’ difficulty finding work after release.

Although our state’s tightening labor market is improving their employment prospects, it will take more than economic growth for former offenders to achieve parity with the rest of the workforce. Public policy can play a role in helping address their barriers to employment—for instance, the NC Department of Commerce’s Reentry Initiative provides employment services to ex-offenders, and state lawmakers recently expanded “certificates of relief” to address employers’ hesitancy to hire this population. Public and non-governmental efforts to connect former offenders to gainful employment may help improve this population’s outcomes while simultaneously addressing employers’ concerns about hiring challenges in a tight labor market.

[1] Demographic information for these cohorts is calculated based on individuals without missing data.

[3] We calculate wages in the years prior to and after incarceration, and treat any wage-earning during these years as an indication of employment. Around 3% of released prisoners are released from more than one period of incarceration in a given year; for these persons, we include only the last release of each year. Wage data in the CFS are based on state unemployment insurance (UI) tax records from employers, and thus may omit earnings from federal government employment, self-employment, “under-the-table” jobs, and other work not covered by state UI laws.

[4] Dollar amounts are adjusted to 2017 price levels using the Consumer Price Index for All Urban Consumers.

[6] The full title for this sector is Administrative and Support and Waste Management and Remediation Services.

[7] Western et al. (2001) provides a summary of these explanations and evidence in the literature.