Completing higher education is becoming increasingly important to finding a job. With the cost of tuition rising faster than financial aid, the greater affordability of community colleges increases access to pursuing a postsecondary credential and, perhaps, attaining higher wages. Still, many of those who enroll in community colleges may struggle to balance ongoing paid employment and family obligations with time spent in class, study, or other training.

The Career and Technical Education (CTE) programs at NCCCS are intended to prepare students for jobs. The Labor and Economic Analysis Division of the North Carolina Department of Commerce recently published a report examining the employment and wage outcomes of participants in publicly funded education, employment training, and workforce programs within the state, including CTE programs.

In this blog post, we focus exclusively on students who entered a CTE associate degree program at North Carolina’s community colleges between 2002 and 2007. Because many students in community colleges are not ultimately able to attain the degree they intended, we compare students who did gain their CTE associate degree to those who, instead, completed a less advanced CTE credential (a postsecondary certificate or diploma), or did not earn any CTE credential, within six years following their initial enrollment in a CTE associate program (years of completion spanning 2002-2013). Postsecondary certificates and diplomas in CTE programs are intended to provide entry-level employment-related training in a shorter course of study. For students able to enroll full time they can typically be completed within one semester, or one year, respectively. 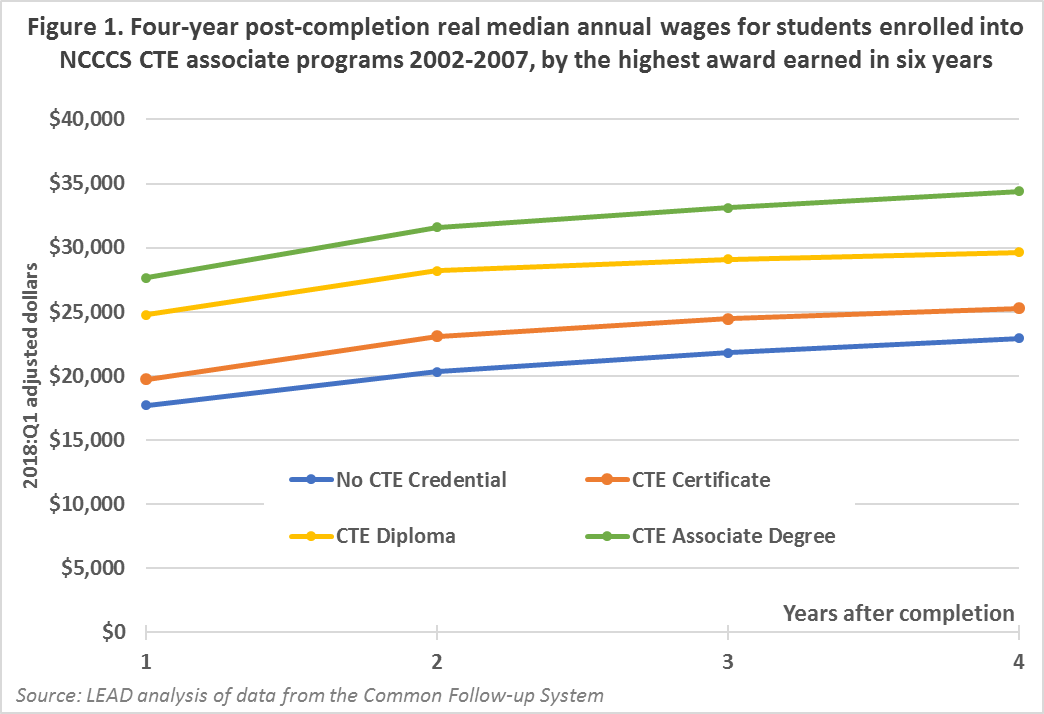 We found that community college students entering a CTE associate program and completing a CTE credential within six years—whether a certificate, diploma, or associate degree—who were subsequently employed, had better wage outcomes than those who dropped out. Those who completed an associate degree had the highest earnings. Earning a diploma (a lengthier program than a certificate) yielded higher wages than earning a certificate, though not as high as earning an associate. Those who earned a certificate still ended up with higher wages after completion than those who dropped out. For all groups, real median wages increased each year after credential completion.

But how many CTE associate program students were able to complete their degree? The majority of program entrants did not complete a CTE credential within six years. Curious to better understand these non-completers’ educational trajectories, we checked their enrollment status two years after they were last observed in a CTE program within the six year window. We noted that about 17% were continuing their education outside of the CTE program, either at a non-CTE program at the community colleges (15.4%), or in the UNC system (2%). Others transferred to a different CTE program area, lengthening their studies. Additionally, other research indicates that if we were to look only at full-time students, we would find that the majority completed their intended credential. 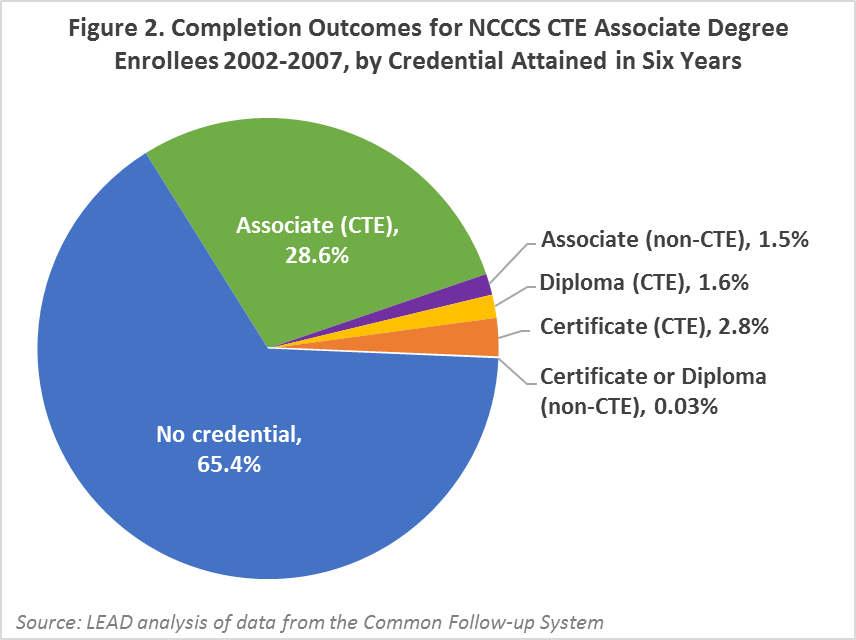 These figures, however, represent a broad range of students. Since 1978, women have surpassed men in their attainment of associate degrees, and have continued to outpace men in their overall representation among all college graduates. The North Carolina Community College System is no exception, and we find that the rates of completing a CTE credential while pursuing a CTE associate degree are indeed higher for women than men. While 37% of women completed a CTE associate, certificate, or diploma within six years of initial enrollment in the CTE associate program, the rate for men was much lower, at 27%. Factoring in women’s higher enrollment rates, more than two thirds of the CTE credential completers who had entered a CTE associate program between 2002-2007 are women (Figure 3). 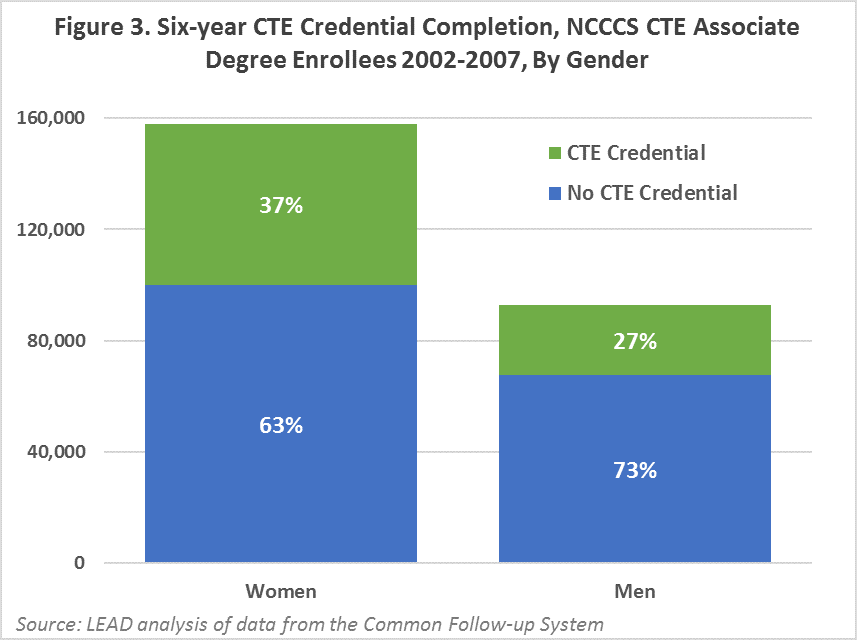 In returning to our initial overview of wage outcomes for CTE associate degree seekers by credential attained, however, we find that, consistent with national trends in gender and wages, men earn higher median annual wages at each level of CTE credential attainment. Women are more likely to earn a credential, but experience overall lower median annual earnings. Women who completed their CTE associate degree show lower wage outcomes after four years than men who began in the CTE associate program but completed only a CTE diploma (see Figure 4). 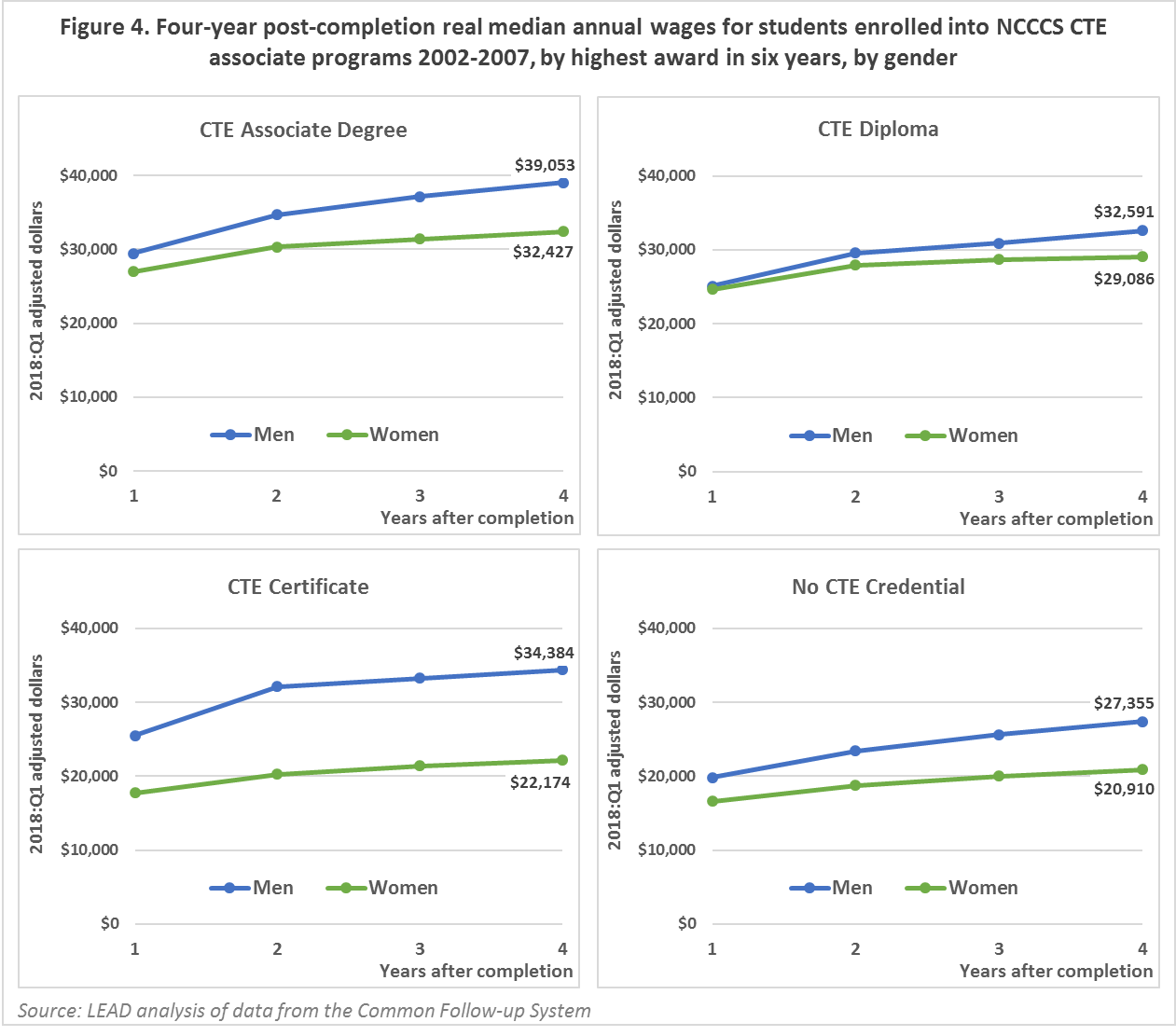 For both men and women, the data mostly show higher real median wage outcomes with a higher CTE credential. However, the patterns for CTE certificates and diplomas diverge by gender.

For men, earning a CTE certificate instead of completing their associate yielded four-year post-completion wages around $7,000 higher than men who dropped out, and $12,000 higher than women who completed a certificate. In contrast, women completing a CTE certificate rather than the intended associate show little wage difference over women who did not attain a CTE credential. Wages for both sets of women were lower than men with no CTE credential.

Overall, the data suggest that obtaining a certificate (men) or diploma (women), is better for future wages than dropping out of a CTE associate program entirely. Women’s greater completion rates are particularly critical for improving wage outcomes.

This blog article was created by Sibyl Kleiner and Oleksandr Movchan of the Data Analytics and Research Team at LEAD.

We explore time to completion and post-completion outcomes for students who enrolled in NCCCS Career and Technical Education associate degree programs between 2002 and 2007.

Although usually students follow a regular academic-year sequence of semesters toward their graduation, from the data it is often difficult to tell if, for example, a student registering for classes in March 2005 is going to start attending courses in Summer semester of 2005 (that would be the 2004/05 academic year), or in the Fall 2005 semester (which would count as 2005/06 academic year). Thus, rather than using the academic year definition for this analysis, student cohorts are defined based on the calendar date of their registration.

All students enrolled into NCCCS CTE associate degree programs are then followed for six years in order to determine if a student either earns an associate degree, completes instead a postsecondary certificate or diploma, or does not earn a credential. Thus, 2002-2013 window is used to track credential completion outcomes for students who enrolled between 2002 and 2007.

Some students were found to switch majors within their associate degree track or take one or two semester breaks; such cases are treated as a single enrollment rather than new enrollment.

Median annual wages, expressed in 2018 (first quarter) dollars, are tracked for all students who enrolled in a CTE associate program between 2002 and 2007. Based on their completion status six years after enrollment, they are counted as having completed a CTE associate, diploma, or certificate, or no CTE credential. Wage tracking begins one year following credential attainment or, for non-completers, the last year the student is enrolled, within the six year window.

Students who enrolled in a CTE associate program but completed a non-CTE credential instead are not tracked separately from non-completers of CTE programs. Note in Figure 2 that these individuals make up less than 2% of enrollees. Non-CTE program completers may be less suitable for immediately tracking of wages by credential without carefully attending to students transferring, or intending to transfer, to the UNC system. Wage outcomes by credential are tracked only for those who completed a CTE credential because these programs are expressly designed to prepare students for jobs.