The labor market is heating up across much of the United States, with employers posting a record number of job openings and reportedly turning to overlooked population groups to meet their need for talent. This article uses data from the North Carolina Common Follow-up System (CFS) to show how a tight labor market can bolster the employment prospects of former prisoners. 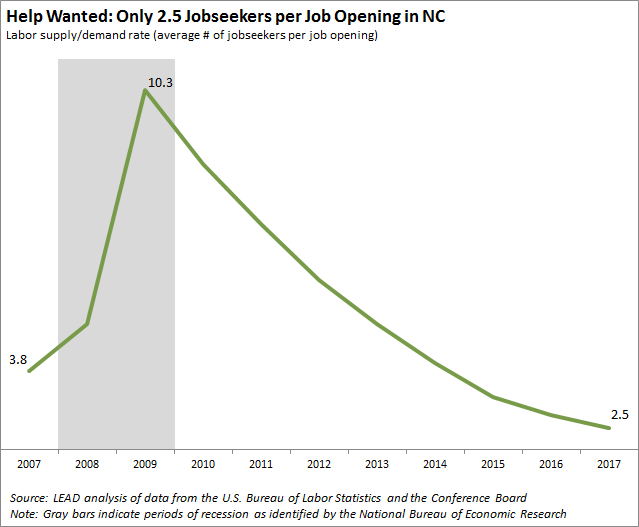 Although the 2011 Justice Reinvestment Act reduced the number of offenders in state-run facilities by redirecting misdemeanants to county jails, North Carolina’s state prisons have released around 20,000 ex-offenders per year in recent years. While this is a small population compared to the nearly 400,000 searching for work on average in 2017, it is comparable to the annual number of students completing Associate’s Degree programs at North Carolina community colleges.3 We don’t yet have data on post-2014 prison releases in the CFS, but official statistics published by the North Carolina Department of Public Safety (DPS) indicate that the number of releases in 2017 was generally consistent with prior years. (Note that the figures in this article may differ slightly from DPS’s reported statistics due to differences in methodology.) 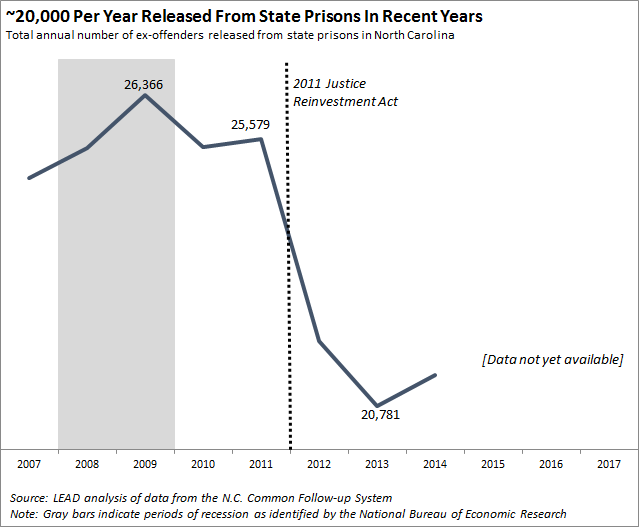 Data on these ex-offenders’ employment outcomes in the year after release shows that their prospects improve when the labor market tightens. For example, only 30% of those released at the height of the recession in 2009 found a job in North Carolina within the next year. Ex-offenders saw their fortunes improve later in the economic cycle as employer demand for labor ramped up; by 2014, during the economic recovery, 39% of those released from state prisons found employment within a year. Although we don’t yet have data on post-2014 prison releases, we would expect the outcomes of ex-offenders to continue improving in subsequent years. (Note that these data only include formal jobs, and may omit self-employment or “under-the-table” jobs.4) 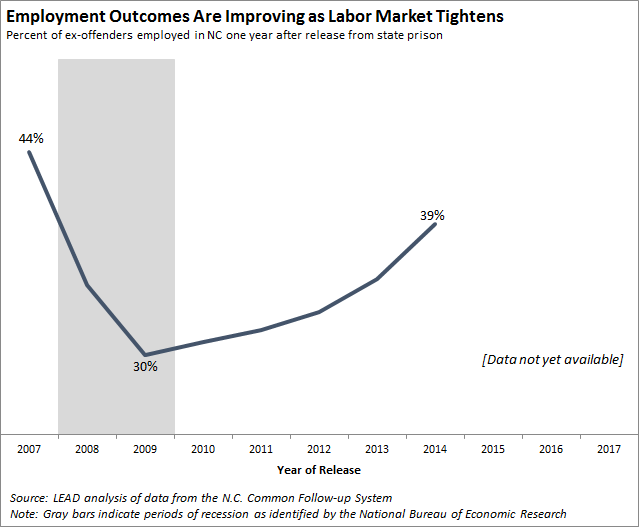 However, these data also demonstrate that ex-offenders are less likely to find work in our state than other populations. For example, 78% of students graduating with an Associate’s Degree from North Carolina community colleges in 2013-2014 were employed within a year after completing their degree5.

The annual wage earnings of ex-offenders also improved in the years following the recession.  After dipping to around $4,500 in 2009, the real median wage of those released from state prison increased to around $5,600 in 2014.6 However, despite this improvement, the wages of ex-offenders remained very low compared to the rest of the workforce. Estimates of the real median annual wage for all workers in North Carolina in 2014 ranged from around $26,000 to $29,000.7 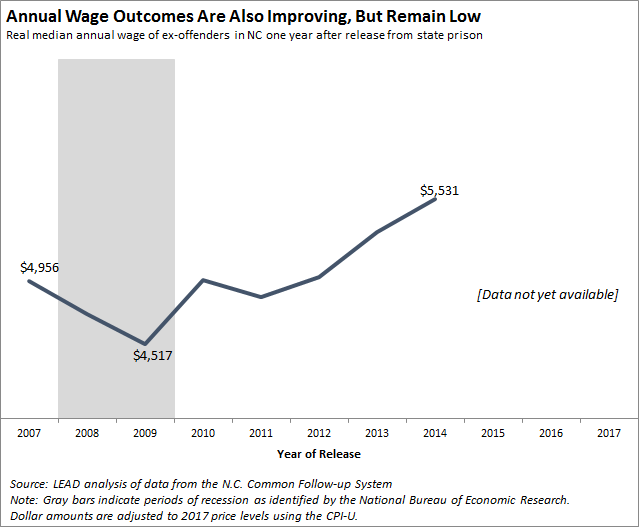 To summarize: employers are facing their most challenging hiring environment in at least ten years. Each year, approximately 20,000 ex-offenders are released from state prisons, representing an important source of talent, especially amidst a tight labor market. The employment and wage outcomes of former prisoners have improved as the labor market has tightened, demonstrating how a growing economy can bolster the employment prospects of this population.

However, a tightening labor market has not been sufficient to lift the fortunes of ex-offenders to levels seen by other workers. Former prisoners remain relatively unlikely to find work in our state after release, and those who are fortunate to find work continue to earn very low wages. Research has shown that incarceration can have a negative impact on wages and employment, and ex-offenders face numerous barriers as they re-enter the labor force, including the stigma of a criminal record.

Stay tuned to the LEAD Feed for further examinations of the workforce experience of ex-offenders, including their workforce status prior to incarceration. We will also post an update to this article later this year after data on post-2014 prison releases are loaded into the CFS.

1 These data on labor supply (jobseekers) and labor demand (job openings) are reported as annual averages of monthly data. Please see here for details about our methodology.

3 For example, according to data in the CFS, 24,390 students graduated with Associate’s Degrees from the North Carolina Community College System during the 2016-2017 school year. See the NC TOWER website for more information.

4 We calculate wages in the years prior to and after incarceration, and treat any wage-earning during these years as an indication of employment. Around 3% of released prisoners are released from more than one period of incarceration in a given year; for these persons, we include only the last release of each year. Wage data in the CFS are based on state unemployment insurance (UI) tax records from employers, and thus may omit earnings from federal government employment, self-employment, “under-the-table” jobs, and other work not covered by state UI laws.

6 Dollar amounts are adjusted to 2017 price levels using the Consumer Price Index for All Urban Consumers.