LEAD recently released a report examining unemployed workers and unemployment insurance (UI) recipients in North Carolina during the Great Recession of 2007-2009 and its aftermath.

We used data from the federal government’s Current Population Survey (CPS) and North Carolina’s Common Follow-up System (CFS) to learn more about these individuals, including their characteristics and their employment outcomes. Our objective is to help workforce planners and policymakers understand the impact of the last recession so they can develop strategies for alleviating unemployment during the next recession.

Our main findings are outlined below:

·        The Great Recession in North Carolina was characterized by record-high unemployment and steep job losses in goods-producing industries and rural counties.

In 2010, during the height of the recession’s aftermath, North Carolina’s unemployment rate peaked at 10.9%, far surpassing the previous high of 9.3% reached during the early 1980s. 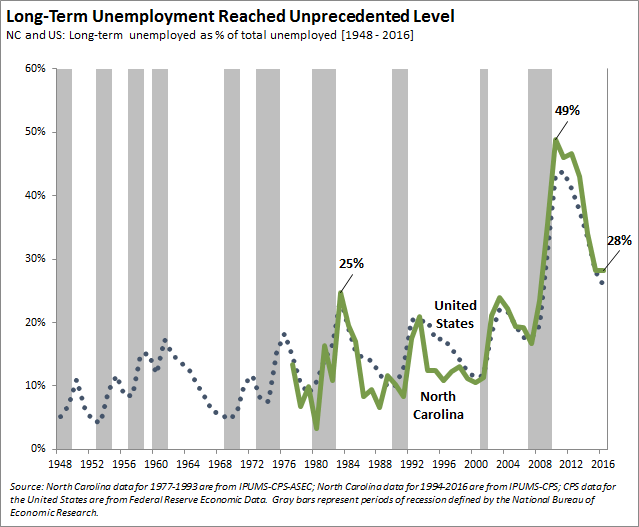 Job losses during the Great Recession were not distributed proportionately across North Carolina. Rather, the jobs impact of the recession was concentrated in the goods-producing sectors and non-metro counties of our state.2 In 2016, the number of jobs in these sectors and regions remained 16% and 5% below 2006 levels, respectively.3

·      The long-term unemployed in North Carolina had poor wage-earning and job-finding outcomes that persisted for at least six years after layoff.

The historic rates of long-term unemployment seen during and after the Great Recession are concerning enough in themselves given the interruptions in wage-earning experienced by these unemployed workers during their prolonged jobless spells. The rise of long-term unemployment and its widespread reach are even more concerning when we consider the poor outcomes faced by this population.

For example, we tracked a cohort of short-term and long-term unemployment insurance (UI) recipients who earned similar wage levels in the years prior to their layoff date.  The long-term UI recipients saw a much larger decline in wages after layoff, and this decline persisted throughout the post-layoff period.  Even six years (24 quarters) after layoff, the average quarterly wage of long-term UI recipients remained $1,300 lower than their short-term counterparts. 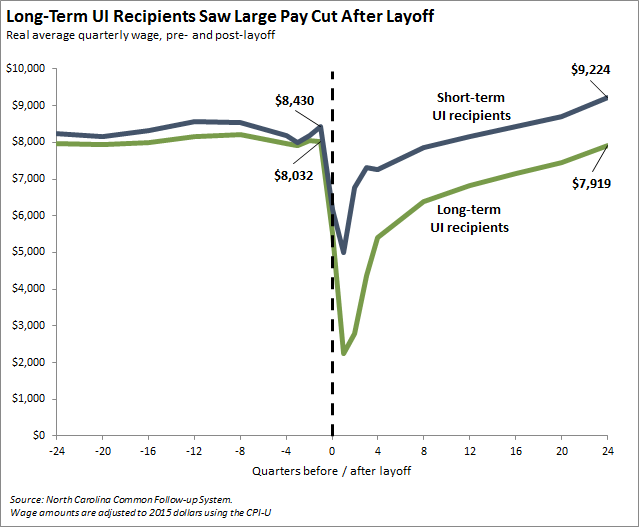 ·        Although job losses were concentrated in certain counties and industry sectors, long-term unemployment plagued all regions of the state and all sectors of our economy.

The long-term unemployed and long-term UI recipients during the recession were comparable to their short-term counterparts in most respects. Long-term unemployment was a widespread phenomenon that affected workers in all industries, demographic groups, and regions of North Carolina, despite the concentrated impact that the recession had on particular sectors of our state’s economy.

For more facts, figures, and a discussion of our findings and their implications for the workforce system, please see our full report here.

Data sources cited in this article are derived from surveys and administrative records and are subject to sampling and non-sampling error.  Any mistakes in data management, analysis, or presentation are the author’s.

1 Throughout this article, we aggregate monthly Current Population Survey (CPS) data into single-year or multi-year averages to increase sample size and improve the reliability of our estimates.  CPS data are not available for North Carolina prior to 1977.  We use CPS data that have been linked longitudinally by the University of Minnesota’s IPUMS program: Flood, Sarah, Miriam King, Steven Ruggles, and J. Robert Warren. Integrated Public Use Microdata Series, Current Population Survey: Version 4.0. [dataset]. Minneapolis: University of Minnesota, 2015. http://doi.org/10.18128/D030.V4.0