Some partisan commentators have seized on the recent drop in North Carolina’s participation rate as evidence of a weakening job market.  However, a closer look at the data reveals that most of this downturn is driven by long-term, structural forces—such as demographic change and increasing school enrollment—which do not reflect a recent deterioration in labor market conditions and, in most cases, are entirely benign.  That said, no matter what is driving this trend, the decline in participation reduces the share of productive labor available for economic activity and thus might spell trouble for our state’s growth potential.

The first thing to understand is that these trends are not limited to North Carolina.  The downturn in labor force participation has affected the entire United States.  Both North Carolina and the broader nation have seen their participation rates take a downward trajectory since around 2000, with the trend accelerating during and after the 2007-2009 recession. 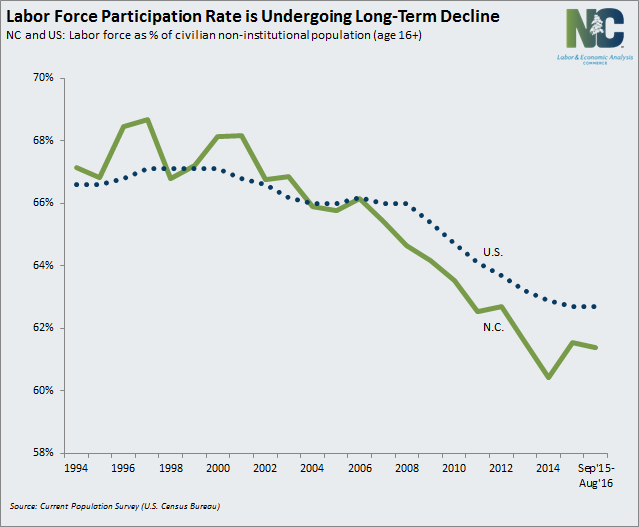 The prime working age population, which is most likely to be engaged in the labor force, has seen their participation rate decrease somewhat since 2000.  Individuals in the mature age group are typically retired or approaching retirement and are the least likely to participate in the labor force, although their participation rate has increased slightly.   The youth population has seen the most dramatic change in participation, declining from 67.2% in 2000 to 53.3% during the most recent 12-month period. 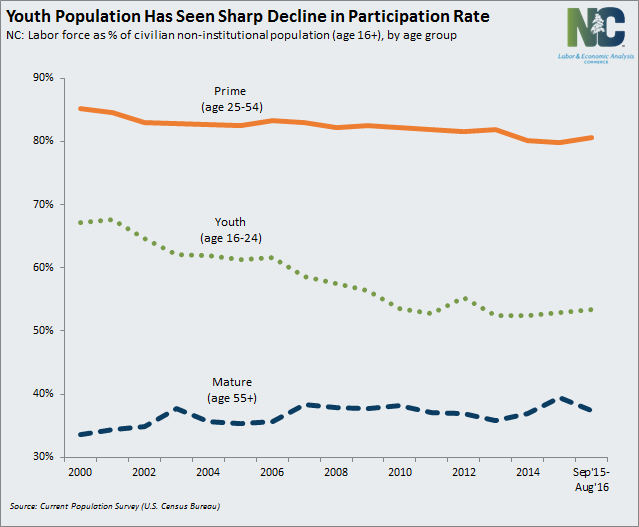 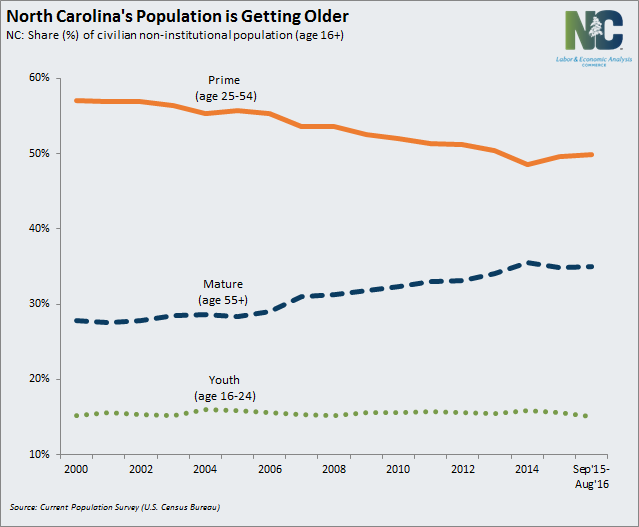 These data suggest that the decrease in North Carolina’s labor force participation rate has been driven by two factors:

i)    falling participation rates among some age groups, and

ii)    a population that is getting older and thus more likely to be retired.

Which factor is more important?

Our analysis indicates that these two factors are equally important, each explaining almost exactly half of the decline in labor force participation since 2000.2 As an illustration: if the age composition of the population remained the same as in 2000, North Carolina’s participation rate would be 64.7%, declining only 3.4 points since 2000 (rather than the 6.7-point drop actually experienced). 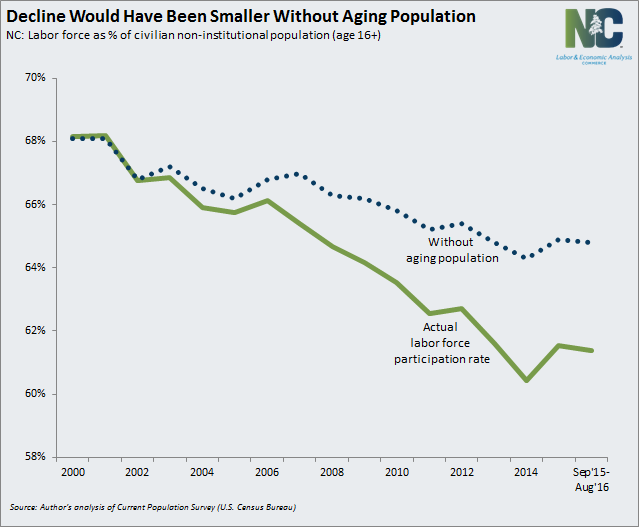 We can also evaluate participation trends by looking at the subset of the population that is not participating in the labor force.

Nearly 1.2 million people have joined North Carolina’s not-in-the-labor-force population since 2000.  The majority of these consist of individuals age 55 and above, which is to be expected given the aging of our population. However, we’ve also seen sizable growth in non-participants among the youth and prime working age populations. 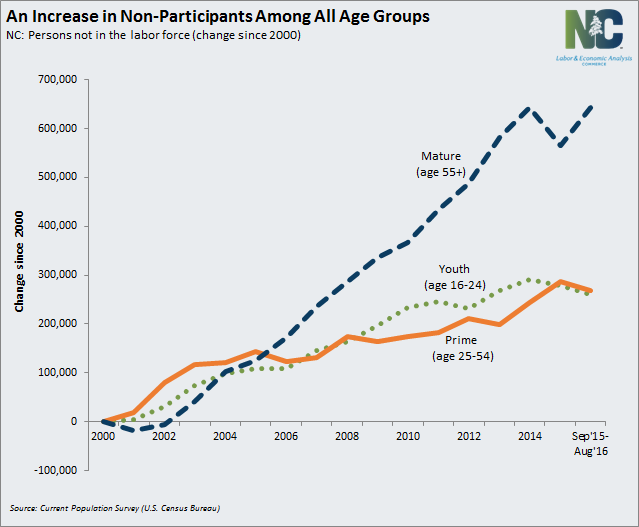 The most interesting and underappreciated aspect of this trend is that the vast majority of these individuals (93.7%) are not interested in a job at the moment.  Rather, they choose not to participate in the labor force because of retirement, school, disability, taking care of family, or other reasons. 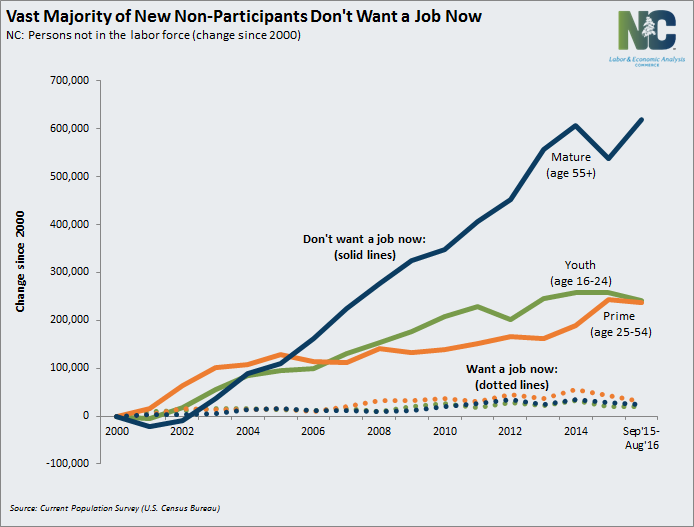 The large increase in mature individuals who don’t want a job is clearly attributable to retirement.  The increase in youth who don’t want a job is somewhat more controversial.  Previous research by LEAD has shown that increasing school enrollment accounts for most of the increase in youth non-participation.  The increase in school enrollment is occurring amid increased competition for entry-level positions from displaced higher-skill workers as well as lower-skill immigrants, which might create a challenging environment for youth employment.  On the other hand, the increasing economic benefits of higher education imply that higher rates of school enrollment are necessary to ensure that the next generation of workers is qualified for the in-demand jobs of the 21st century.

The increase in prime working age individuals who don’t want a job is more troubling and even more difficult to explain.  The decline since 2000 has been driven by primarily by increasing numbers of prime working age women out of the labor force.  Recent research has pointed to a generational shift as more recent cohorts of women of child-rearing age have opted out of the labor force.  This recent decline in female participation has also occurred alongside a decades-long drop-off in the participation rate of prime working age males, many of whom report serious health conditions.  While these trends are concerning, they appear for the time being to be insensitive to current market conditions; recent declines in the unemployment rate have not induced these workers to re-enter the labor force.

In conclusion: despite the contentions of some commentators, the decline in North Carolina’s labor force participation rate does not appear to be caused by current weakness in our labor market.  Our state’s participation rate has been moving downward since peaking in 2000, and half of this decline can be attributed solely to the natural aging of the population.  The vast majority of new non-participants, including retirees and students, don’t want a job now.  A portion of new non-participants who don’t want a job are in their prime working years, and their lack of connection to the labor market is disconcerting; however, the problems with this population appear to be structural in nature.

Whatever the cause, declining rates of labor force participation mean that a smaller share of North Carolinians are engaged in the economy.  This reduces our productive capacity and can potentially lead to slower economic growth.  There are several options to consider that may help offset this corrosive long-term trend.  For instance, bolstering the value of work or enabling work-life balance might draw more individuals into the labor force, while promoting population growth and encouraging productivity-enhancing investments in education, training, and physical capital can keep North Carolina’s economy growing even in the face of lower labor force participation.

Data sources cited in this article are derived from surveys and administrative records and are subject to sampling and non-sampling error.  Any mistakes in data management, analysis, or presentation are the author’s.

2 This analysis is accomplished by separating changes in the labor force participation rate into two components: 1) changes in the age composition of the workforce, and 2) participation changes within each age group, as follows: (LFall / POPall) = Σ(POPgroup / POPall) * Σ(LFgroup / POPgroup). I perform this decomposition using Fisher’s “ideal” index, which permits a multiplicative decomposition of change over time without a residual.